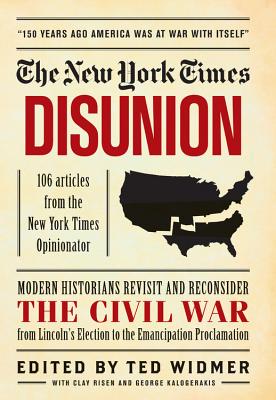 By The New York Times, Ted Widmer (Editor), Clay Risen (With), George Kalogerakis (With)
$31.30
Not Available

A major collection of modern commentary from scholars, historians, and Civil War buffs on the significant events of the Civil War, culled from The New York Times' popular Disunion on-line journal.

Since its debut, The New York Times' acclaimed web journal entitled 'Disunion' has published hundreds of original articles and won multiple awards, including "Best History Website" from the New Media Institute and the History News Network. Following the chronology of the secession crisis and the Civil War, the contributors to Disunion, who include modern scholars, journalists, historians, and Civil War buffs, offer contemporary commentary and assessment of the Civil War as it unfolded chronologically.

Now, this commentary has been gathered together and organized in one volume. In The New York Times: Disunion, historian Ted Widmer has curated more than 100 articles that span events beginning with Lincoln's presidential victory through the Emancipation Proclamation. Topics include everything from Walt Whitman's wartime diary to the bloody guerrilla campaigns in Missouri and Kansas. Esteemed contributors include William Freehling, Adam Goodheart, and Edward Ayers, among others.

The book also compiles new essays that have not been published on the Disunion site by well-known historians such as David Blight, Gary Gallagher, and Drew Gilpin Faust. Topics include the perspective of African-American slaves and freed men on the war, the secession crisis in the Upper South, the war in the West (that is, past the Appalachians), the war in Texas, the international context, and Civil War-era cartography. Portraits, contemporary etchings, and detailed maps round out the book.

The New York Times is regarded as the world's preeminent newspaper. Its news coverage is known for its exceptional depth and breadth, with reporting bureaus throughout the United States and in twenty-six foreign countries. Winner of 112 Pulitzer Prizes, the Times has the largest circulation of any seven-day newspaper in the U.S.

Ted Widmer is a historian at Brown University, where he is Assistant to the President for Special Projects. He has served as a senior adviser to Secretary of State Hillary Clinton, Director and Librarian of the John Carter Brown Library, and Director of the C.V. Starr Center for the Study of the American Experience at Washington College. He has written or edited many works of history, including, most recently, Listening In: The Secret White House Recordings of John F. Kennedy.

Clay Risen is an op-ed staff editor at the New York Times and the author of A Nation on Fire: America in the Wake of the King Assassination.

From the annals of the New York Times Opinionator column and timed to coincide with the 150th anniversary of the Battle of Gettysburg, Brown University historian Widmer has pieced together a selection for readers both mildly and deeply interested in the Civil War. Did you know that four slave-holding states remained in the Union after the Civil War began? That President Lincoln was elected without a single electoral vote from the South? Or that West Virginia came into existence when the western part of Virginia "seceded from secession"? Tidbits like these populate pages culled from brief essays in the paper's online column, and the book's format allows for smaller, captivating stories to be told?the kind that are often over-looked in epic histories?like Lincoln's last visit with his step-mother or how Nick Biddle, an African-American servant to a captain in the Union Army, might have been the first to shed blood in hostility during the war. Well-known historians such as Ken Burns, Stephanie McCurry and Adam Goodheart are all represented in this absorbing and important series. B&W photos.