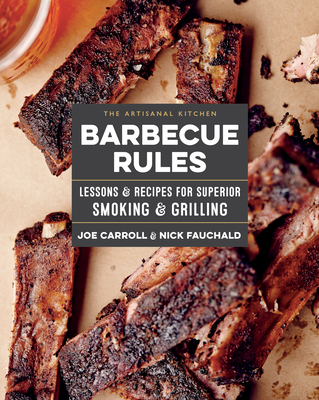 Great barbecue and grilled meats are at the heart of summer cooking, and in this book from barbecue expert Joe Carroll, fire-cooked foods are approachable and downright delicious. With more than 30 mouthwatering recipes and six informational essays in this handy book—adapted from Carroll’s Feeding the Fire—he proves that you don’t need fancy equipment or long-held regional traditions to make succulent barbecue and grilled meats at home. Barbecue Rules teaches the hows and whys of live-fire cooking: how to roast a pork loin (and what cut to ask your butcher for), how to create low and slow heat, why quality meat matters, and how to make the best sides to accompany the main event (the key is to keep it simple). With recipes for classics like Beef Brisket and Pulled Pork Shoulder and more adventurous flavors like Sweet Tea–Brined Poussins and Lamb Saddle Chops with Mint-Yogurt Sauce, there are recipes for every palate and outdoor occasion.

Born and raised in northern New Jersey, Joe Carroll didn’t grow up steeped in Southern barbecue culture. With a curious nature and a love of food, Carroll launched barbecue joint Fette Sau in Brooklyn in 2007, luring in equal parts hipsters and barbecue devotees. With his beer garden, Spuyten Duyvil, and his casual American steak house, St. Anselm, in Brooklyn, Carroll continues to expand, opening Fette Sau in Philadelphia as well. Carroll; his wife, Kim; and their twin daughter and son live in Brooklyn, New York.

Nick Fauchald is a Brooklyn-based editor and author. He has worked as an editor at Food & Wine, Wine Spectator, and Every Day with Rachael Ray and was editor in chief of TastingTable.com. Nick is the publisher of Short Stack Editions, a series of single-subject cookbooks, and cofounder of Little Sous, a culinary media company.