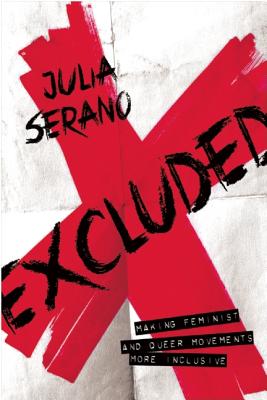 A transformational approach to overcoming the divisions between feminist communities

While many feminist and queer movements are designed to challenge sexism, they often simultaneously police gender and sexuality -- sometimes just as fiercely as the straight, male-centric mainstream does. Some feminists vocally condemn other feminists because of how they dress, for their sexual partners or practices, or because they are seen as different and therefore less valued. Among LGBTQ activists, there is a long history of lesbians and gay men dismissing bisexuals, transgender people, and other gender and sexual minorities. In each case, exclusion is based on the premise that certain ways of being gendered or sexual are more legitimate, natural, or righteous than others.

As a trans woman, bisexual, and femme activist, Julia Serano has spent much of the last ten years challenging various forms of exclusion within feminist and queer/LGBTQ movements. In Excluded, she chronicles many of these instances of exclusion and argues that marginalizing others often stems from a handful of assumptions that are routinely made about gender and sexuality. These false assumptions infect theories, activism, organizations, and communities -- and worse, they enable people to vigorously protest certain forms of sexism while simultaneously ignoring and even perpetuating others.

Serano advocates for a new approach to fighting sexism that avoids these pitfalls and offers new ways of thinking about gender, sexuality, and sexism that foster inclusivity.

Julia Serano is a highly regarded writer and thinker on the subjects of gender, feminism, and LGBTQ issues. She is best known for her book Whipping Girl: A Transsexual Woman on Sexism and the Scapegoating of Femininity, which garnered rave reviews -- the Advocate placed it on their list of "Best Non-Fiction Transgender Books," and readers of Ms. Magazine ranked it #16 on their list of the "100 Best Non-Fiction Books of All Time."

Julia's writings have also appeared in numerous anthologies; in feminist, queer, and progressive magazines and websites (including Bitch Magazine, Out, AlterNet.org, Ms. Magazine blog, and Feministing.com); and are regularly used as teaching materials in gender studies, queer studies, psychology, and human sexuality courses in colleges across North America.

Julia's background as a writer, performer, activist, and biologist (she has a PhD in biochemistry from Columbia University) makes her a unique voice on the subjects of gender and sexism. She has the rare gift of being able to present complex ideas from feminism and gender/queer theory, and to interweave them with her personal experiences as a bisexual trans woman, in a clear, compelling, and entertaining manner.

"As a transsexual woman, [Serano] says that being a woman isn't just something she puts on or pretends to be - it's who she is. As a self-declared femme, she says that feminine gender expression - wearing make-up, or a dress, or crying - is not artificial, but rather natural to her. And as a biologist, she's saying that gender isn't performance, or isn't only performance; it's not (just) something you play at, but something you are."—The Atlantic

"Through her own experiences and stories, as well as her amazing brain, Serano is able to call out the movements she calls home for excluding her, essentializing her experience, and refusing to accept her person."—Autostraddle

"Serano uses her personal experiences as a lens to ask some major questions about how liberatory politics become limited when certain groups are sidelined."—Bitch

"Serano's vision of an updated and holistic feminism isn't just about making some elbow room for those of us marginalized in the struggle. It calls for full and equal participation. The new image of feminism looks like all of us. . . [She] transforms topics mired in controversy and complexity and skillfully narrows them down."—Curve