The Women Who Made New York (Hardcover) 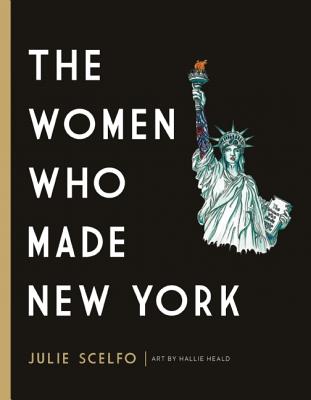 An illuminating, elegant history of New York City, told through the stories of the women who made it the most exciting and influential metropolis in the world

But that's not the whole story.

The Women Who Made New York reveals the untold stories of the phenomenal women who made New York City the cultural epicenter of the world. Many were revolutionaries and activists, like Zora Neale Hurston and Audre Lorde. Others were icons and iconoclasts, like Fran Lebowitz and Grace Jones. There were also women who led quieter private lives but were just as influential, such as Emily Warren Roebling, who completed the construction of the Brooklyn Bridge when her engineer husband became too ill to work.

Paired with striking, contemporary illustrations by artist Hallie Heald, The Women Who Made New York offers a visual sensation -- one that reinvigorates not just New York City's history but its very identity.

Julie Scelfo is a frequent contributor to the New York Times, where her stories about how we live routinely appear on the Times's more e-mailed list. Prior to joining the Times in 2007, Scelfo was a correspondent at Newsweek, where she covered breaking news and wrote about society and human behavior. She covered the events of September 11, 2001, live from lower Manhattan, then reported extensively on the attack's environmental and emotional aftermath. Scelfo lives with her family in New York City.

Hallie Heald is an illustrator and stylist living and working in New York City. Her work has appeared in various magazines, including Darling, Galore, Vogue India, Jute, Tantalum, and MODO magazines. Her styling clients have included Theory, Bloomingdales, Macy's, Helmut Lang, and DKNY.

"What would NYC be without women? In this glittering volume, Julie Scelfo provides the indisputable answer: not much. These women are my muses."—Zac Posen

"A must-read for anyone who loves New York."—Jonathan Atler, New York Times bestselling author of The Center Holds: Obama and His Enemies

"These women were the original prizefighters...who built the best city in the world."—Jessica Bennett, New York Times columnist and author of Feminist Fight Club

"Finally -- in Julie Scelfo's brilliant collection of portraits and vignettes, the Town Mothers of NYC loom as large as the Town Fathers, often towering over them."—Teresa Carpenter, Pulitzer Prize-winner and bestselling author of New York Diaries 1609-2009

"Julie Scelfo's astonishing collection of fabulously fearless females reminds us that New York City has always been a . magnet for taboo-busting, rule-breaking women."—Simon Doonan, author of The Asylum: True Tales of Madness from a Life in Fashion and creative ambassador for Barneys New York

"After centuries of women's work being written out of history, The Women Who Made New York gracefully and passionately rewrites that wrong."—Irin Carmon, New York Times bestselling co-author of Notorious RBG: The Life and Times of Ruth Bader Ginsburg

"Finally finally finally: the mighty women whose formidable ghosts still walk the streets of New York get their due."—Virginia Heffernan, New York Times Magazine contributor and author of Magic and Loss: The Internet as Art

"These brief biographies reveal a dynamism and diversity as rich as New York City itself."—Valerie Paley, Chief Historian and Director of the Center for Women's History at the New-York Historical Society

"A welcome antidote to male-centered history...I long for the day when books like this become unnecessary."—David Byrne

"From artists to activists, an homage to the unheralded hands and hearts who built one of humanity's most iconic cities... Rigorously researched and elegantly written."
—Brainpickings

"Paired with striking illustrations by artist Hallie Heald, The Women Who Made New York offers a visual look at some of the most vibrant women in the history of one of the world's most vibrant cities."—Bustle

"This book on New York City history is more than a pretty cover. It is a testament to the lives of impressive women in the Big Apple."—Chronogram