Taboo: Why Black Athletes Dominate Sports And Why We're Afraid To Talk About It (Paperback) 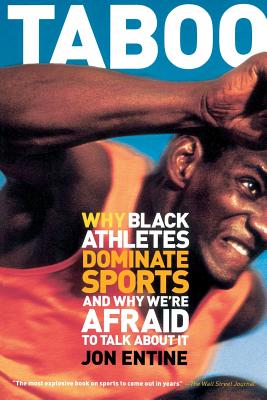 In virtually every sport in which they are given opportunity to compete, people of African descent dominate. East Africans own every distance running record. Professional sports in the Americas are dominated by men and women of West African descent. Why have blacks come to dominate sports? Are they somehow physically better? And why are we so uncomfortable when we discuss this? Drawing on the latest scientific research, journalist Jon Entine makes an irrefutable case for black athletic superiority. We learn how scientists have used numerous, bogus "scientific" methods to prove that blacks were either more or less superior physically, and how racist scientists have often equated physical prowess with intellectual deficiency. Entine recalls the long, hard road to integration, both on the field and in society. And he shows why it isn't just being black that matters—it makes a huge difference as to where in Africa your ancestors are from.Equal parts sports, science and examination of why this topic is so sensitive, Taboois a book that will spark national debate.

Jon Entine first became interested in the subject of black athletes when he produced a 1989 television special for Tom Brokaw on the subject. The long-time producer of NBC Nightly News, Entine has also written numerous articles, several of them major award winners. He lives in Southern California.