Bolt Of Fate: Benjamin Franklin And His Fabulous Kite (Paperback) 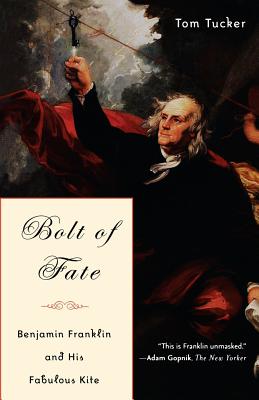 Every schoolchild in America knows that Benjamin Franklin flew a kite during a thunderstorm in the summer of 1752. Electricity from the clouds above traveled down the kite's twine and threw a spark from a key that Franklin had attached to the string. He thereby proved that lightning and electricity were one.

What many of us do not realize is that Franklin used this breakthrough in his day's intensely competitive field of electrical science to embarrass his French and English rivals. His kite experiment was an international event and the Franklin that it presented to the world -- a homespun, rural philosopher-scientist performing an immensely important and dangerous experiment with a child's toy -- became the Franklin of myth. In fact, this sly presentation on Franklin's part so charmed the French that he became an irresistible celebrity when he traveled there during the American Revolution. The crowds and the journalists, and the ladies, cajoled the French powers into joining us in our fight against the British.

What no one has successfully proven until now -- and what few have suggested -- is that Franklin never flew the kite at all. Benjamin Franklin was an enthusiastic hoaxer. And with the electric kite, he performed his greatest hoax. As Tucker shows, it was this trick that may have won the American Revolution.

Tom Tucker is an award-winning author who writes often about the history of invention. His most recent publication The Eclipse Project was issued by NASA, the result of a fellowship administered by NASA Dryden Flight Research Center and Stanford University. He lives in Rutherfordton, North Carolina with his family.