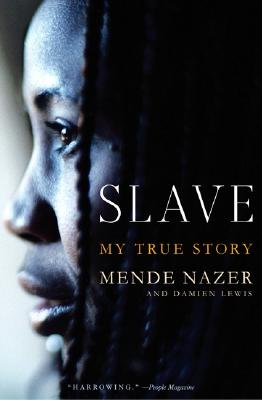 Mende Nazer lost her childhood at age twelve, when she was sold into slavery. It all began one horrific night in 1993, when Arab raiders swept through her Nuba village, murdering the adults and rounding up thirty-one children, including Mende.

Mende was sold to a wealthy Arab family who lived in Sudan's capital city, Khartoum. So began her dark years of enslavement. Her Arab owners called her "Yebit," or "black slave." She called them "master." She was subjected to appalling physical, sexual, and mental abuse. She slept in a shed and ate the family leftovers like a dog. She had no rights, no freedom, and no life of her own.

Normally, Mende's story never would have come to light. But seven years after she was seized and sold into slavery, she was sent to work for another master-a diplomat working in the United Kingdom. In London, she managed to make contact with other Sudanese, who took pity on her. In September 2000, she made a dramatic break for freedom.

Slave is a story almost beyond belief. It depicts the strength and dignity of the Nuba tribe. It recounts the savage way in which the Nuba and their ancient culture are being destroyed by a secret modern-day trade in slaves. Most of all, it is a remarkable testimony to one young woman's unbreakable spirit and tremendous courage.

Mende Nazer is the author of the international bestselling autobiography Slave that has touched millions of lives and called many to action. Her story has gone on to inspire the motion picture I Am Slave and the stage adaptation of her life, Slave - A Question of Freedom.

Damien Lewis is a lifelong dog lover and award-winning writer who spent twenty years reporting from war, disaster, and conflict zones for the BBC and other global news organizations. He is the bestselling author of more than twenty books, many of which are being adapted into films or television series, including military history, thrillers, and several acclaimed memoirs about military working dogs. Lewis lives in Dorchester, England, with his family and retired assistance dog black Labrador Moxie.