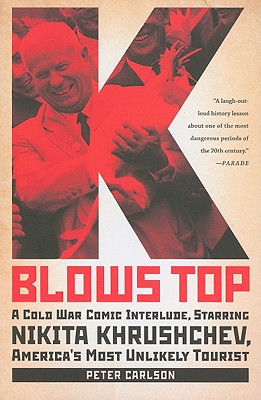 “Who knew a history book could be so funny? Romp along with the blustery premier of the USSR in 1959, with all his wacky pronouncements, and learn (or remember) a little something about the coldest days of the cold war. This is a fun book for everyone.”
— Pete Mulvihill, Green Apple Books, San Francisco, CA

Khrushchev's 1959 trip across America was one of the strangest exercises in international diplomacy ever conducted. Khrushchev told jokes, threw tantrums, sparked a riot in a San Francisco supermarket, wowed the coeds in a home economics class in Iowa, and ogled Shirley MacLaine as she filmed a dance scene in Can-Can. He befriended and offended a cast of characters including Nelson Rockefeller, Richard Nixon, Eleanor Roosevelt, Elizabeth Taylor, and Marilyn Monroe.

K Blows Top is a work of history that reads like a Vonnegut novel. This cantankerous communist's road trip took place against the backdrop of the fifties in America, with the shadow of the hydrogen bomb hanging over his visit like the Sword of Damocles. As Khrushchev kept reminding people, he was a hot-tempered man who possessed the power to incinerate America.

Peter Carlson is the author of K Blows Top, which has been optioned into a feature film. For many years, he was a reporter and columnist for the Washington Post. He has also written for Smithsonian magazine, American History, and the Huffington Post. He lives in Rockville, MD.