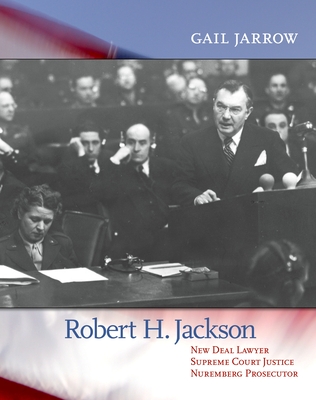 Meet Robert H. Jackson in an engaging biography, the first published in over fifty years.

For four hours on November 21, 1945, the world watched and listened as Justice Robert H. Jackson, on leave from the U.S. Supreme Court, introduced the Allies' case against the high-ranking Nazi leadership at the Nuremberg Trial. For the first time, a country's leaders were being tried for war crimes, in large part owing to Jackson's efforts. Acclaimed author Gail Jarrow's biography Jackson details the personal journey of this extraordinary man from his childhood in rural New York; to President Franklin D. Roosevelt's New Deal inner circle during the Great Depression; to the position of attorney general while the nation prepared for World War II; to the Supreme Court bench when it ruled on such significant cases as Brown v. Board of Education of Topeka; and to chief U.S. prosecutor at the Nuremberg Trial. Despite his remarkable accomplishments, Jackson never attended college or earned a law degree. Using primary sources—including Jackson's papers in the Library of Congress and materials from the Robert H. Jackson Center in Jamestown, New York—Jarrow tells the fascinating story of a lawyer and judge dedicated to the rule of law. A timeline, bibliography, source notes, additional resources, and index are included.

"Will be especially useful to social-studies teachers looking for supplemental information for World War II and Holocaust curricula. An impressively detailed and fascinating treatment of a little-known yet important figure in American history."—School Library Journal

"This engaging biography describes the path of Robert H. Jackson from country boy to Supreme Court Justice. The text clearly conveys the historic events, political ideologies, and constitutional laws of his lifetime in addition to relating his impact on issues facing our country today...An extensive list of resources completes this well-researched volume."—Horn Book