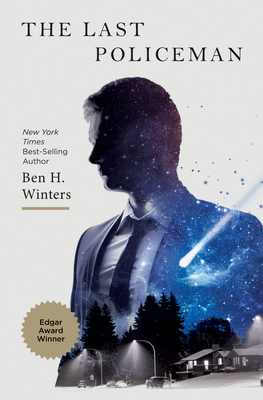 This is book number 1 in the The Last Policeman Trilogy series.

“The cliched plot of the end of the world gets a new look in The Last Policeman. With an asteroid on its way to Earth, normal life has already shut down. Faced with certain doom, people decide working is a fool's game and head off to fulfill their 'bucket lists,' except for a very few, including Detective Hank Palace. His only desire is to be a policeman, so he can't help trying to solve crimes even though it's a thankless job. Modern technology is useless with no workers to keep it going, so Hank uses old fashioned footwork and reasoned thinking to find a murderer. If certain doom ever becomes reality, I would include this series in my stack of books to read before the end!”
— Ann Carlson, Harborwalk Books, Georgetown, SC

As Seen on Today with Hoda & Jenna

Winner of the 2013 Edgar® Award for Best Paperback Original!

What’s the point in solving murders if we’re all going to die soon, anyway?

Detective Hank Palace has faced this question ever since asteroid 2011GV1 hovered into view. There’s no chance left. No hope. Just six precious months until impact.

The economy spirals downward while crops rot in the fields. Churches and synagogues are packed. People all over the world are walking off the job—but not Hank Palace. He’s investigating a death by hanging in a city that sees a dozen suicides every week—except this one feels suspicious, and Palace is the only cop who cares.

The first in a trilogy, The Last Policeman offers a mystery set on the brink of an apocalypse. As Palace’s investigation plays out under the shadow of 2011GV1, we’re confronted by hard questions way beyond “whodunit.” What basis does civilization rest upon? What is life worth? What would any of us do, what would we really do, if our days were numbered?

“I’m in the middle of it and can’t put the dang thing down.”—USA Today’s Pop Candy

“I’m eager to read the other books, and expect that they’ll keep me as enthralled as the first one did.”—Mark Frauenfedler, Boing Boing

“The Last Policeman is extraordinary—as well as brilliant, surprising, and, considering the circumstances, oddly uplifting.”—Mystery Scene

“Full of compelling twists, likable characters, and a sad beauty, The Last Policeman is a gem.”—San Francisco Book Review

“This is a book that asks big questions about civilization, community, desperation and hope.”—io9

“In his Last Policeman trilogy, for which he won both the Edgar Award and the Philip K. Dick Award, Winters took a standard science fiction trope — the final months before an asteroid slams into Earth — and mixed it with some of the conventions of the detective novel, imbuing his apocalyptic scenario with an extra measure of urgency and poignancy.”—The San Francisco Chronicle

“The Last Policeman succeeds both as a mystery, with a quirky detective and an intriguing whodunit, and as a piece of apocalyptic speculative fiction.”—Sacramento News & Review

“A promising kickoff to a planned trilogy. For Winters, the beauty is in the details rather than the plot’s grim main thrust.”—Kirkus Reviews, starred review