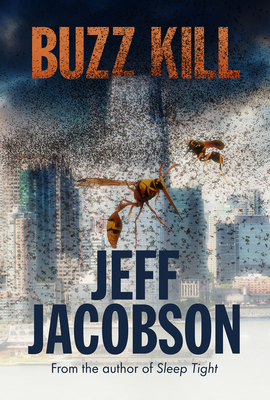 THEY DON’T JUST STING YOU.
They lay their eggs in human flesh. They hatch and crawl beneath the skin. Then they grow wings and burst out of the body. A rare species of wasp from the Amazon jungle, they are unusually large, extremely aggressive—and coming to America on the next international flight . . .

THEY BREED INSIDE OF YOU.
On a Florida-bound plane from Honduras, a baby screams in pain. Minutes later, the wasps emerge from their human host. They attack the passengers, sting the crew, and send the plane crashing into the gulf. No one survives. Over three hundred bodies are pulled from the wreckage. Bodies injected with tens of thousands of eggs . . .

CALL THE EXTERMINATORS.
In a Miami morgue, the larvae feast on the dead. Then they erupt from the corpses, attacking every living human in sight. Soon they are swarming across the state, spreading throughout the country,  breeding and growing in number, size—and viciousness. Pesticides won’t stop them. But a young entomologist and a motley crew of military convicts are fighting back—using science, smoking grenades, and flamethrowers. They call themselves The Exterminators. And they’ll do whatever it takes to wipe these nasty buggers off the face of the earth—before they kill us all . . .

Prepare yourself for a skin-crawling shocker by Jeff Jacobson, the acclaimed master of cult horror classics like Sleep Tight, Growth, and Wormfood.

“A talent with an amazing ability to astonish.”—David Morrell, bestselling author of First Blood

Jeff Jacobson lives near Chicago with his famly and a whole bunch of pets. He teaches fiction and screenwriting at Columbia College, Chicago. He's a fan of hard-boiled novels, heavy metal, movies with lots of guns, good whiskey, bad monster movies, mountain biking, Krav Maga, and needlessly violent video games, among other interests.