Obsessed: America's Food Addiction -- and My Own (Paperback) 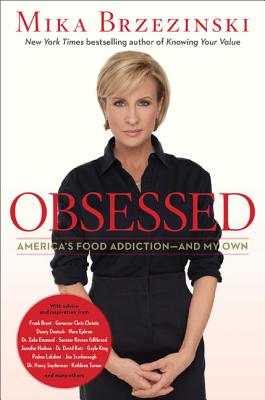 By Mika Brzezinski
$17.92
Not Available

Mika Brzezinski is at war against obesity. On Morning Joe, she is often so adamant about improving America's eating habits that some people have dubbed her "the food Nazi." What they don't know is that Mika wages a personal fight against unhealthy eating habits every day, and in this book she describes her history of food obsession and distorted body image, and her lifelong struggle to be thin. She believes it's time we all learned to stop blaming ourselves, and each other, and look at the real culprits-the food we eat and our addiction to it. Mika feels the only way to do this is to break through the walls of silence and shame we've built around obesity and food obsessions. She believes we need to talk openly about how our country became overweight, and what we can do to turn the corner and step firmly onto the path of health. So Mika made a deal with her very close friend Diane: they would work together on this book and on their personal goals, to help Diane drop 75 pounds and to break Mika's obsession with staying superthin.

As she did in her bestseller Knowing YourValue, Mika has packed each chapter with insights from notable people in medicine, health, business, the arts, and politics. Singer Jennifer Hudson, the late writer and director Nora Ephron, TV host Gayle King, New Jersey governor Chris Christie, and many others open up to Mika about their own challenges and what works for them when it comes to food and diet. It's time we stopped whispering the F-word ("fat") the way we used to shun the C-word ("cancer").

This book-with its trademark Brzezinski smarts, honesty, and courage-launches us into a no-holds-barred conversation with family and friends, in schools and kitchens, in Congress and the food industry, to help us all find ways to tackle one of the biggest problems standing between us and a healthier America.

Mika Brzezinski is a co-host of Morning Joe, an MSNBC anchor, author of the New York Times bestsellers All Things at Once, Knowing Your Value, and Obsessed. and founder of the women's empowerment community, "Know Your Value". She also served as a visiting fellow at the Harvard Institute of Politics. She is the mother of two daughters.

Diane Smith is an Emmy award winning TV journalist, radio talk show host, and author. The Globe Pequot Press has published six books based on Diane's Positively Connecticut TV series. Diane has been honored with the Governor's Award for Excellence in Culture and Tourism for her outstanding lifetime achievements and contributions to the arts and tourism in Connecticut. In October 2012 Diane was honored by the Connecticut Women's Hall of Fame.