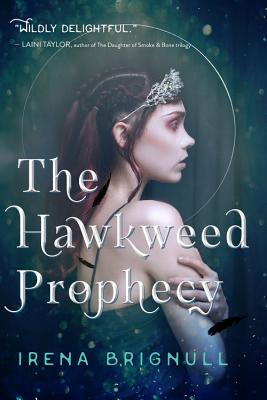 By Irena Brignull
$12.31
Not Available

This is book number 1 in the The Hawkweed Series series.

By renowned screenwriter Irena Brignull (The Boxtrolls and The Little Prince) comes a major new Young Adult series about the power of sisterhood, fate, and magic. Followed by the sequel The Hawkweed Legacy.

A stunning debut tells a bewitching story: two girls, one ancient prophecy. Only one can be queen of the witches.

Poppy Hooper and Ember Hawkweed couldn't lead more different lives. Poppy is a troubled teen: moving from school to school, causing chaos wherever she goes, never making friends or lasting connections. Ember is a young witch, struggling to find a place within her coven and prove her worth. Both are outsiders: feeling like they don't belong and seeking escape.

Poppy and Ember soon become friends, and secretly share knowledge of their two worlds. Little do they know that destiny has brought them together: an ancient prophecy, and a life-changing betrayal. Growing closer, they begin to understand why they've never belonged and the reason they are now forever connected to each other.

Switched at birth by the scheming witch Raven Hawkweed, Poppy and Ember must come to terms with their true identities and fight for their own place in the world. Enter Leo, a homeless boy with a painful past who -- befriending them both -- tests their love and loyalty. Can Poppy and Ember's friendship survive? And can it withstand the dark forces that are gathering?

Irena Brignull is an acclaimed screenwriter whose credits include The Boxtrolls and The Little Prince. Previously, Irena was a Script Executive at the BBC and then Head of Development at Dogstar Films, working on Shakespeare in Love, I Capture the Castle, and Bravo Two Zero among other films. She holds a BA in English Literature from the University of Oxford.

"Brignull's The Hawkweed Prophecy is a deft exploration of friendship, sacrifice, and betrayal. I can't decide who I love more, the sweet and trusting Ember or the spunky, dark Poppy. You can't help but cheer for both girls, and ache when they are pitted against one another. I was completely absorbed in the sinister, complicated world of magic and witches. The coven is described so confidently and beautifully, it's hard to emerge from the novelw ithout wondering if these women are operating somewhere just below the surface of our world. Full of romance, heart, and suspense, readers will find themselves staying up all night just to spend a little more time with Ember and Poppy."
—Madeleine Roux, author of the Asylum series

"Irena Brignull's The Hawkweed Prophecy is a book of wicked, beautiful magic. Compulsively readable and delightfully gritty, one does not mess with these Hawkweed witches."
—Kendare Blake, author of Anna Dressed in Blood, and Three Dark Crowns

"Wise, weird, a touch evil and totally charming, Irena Brignull's tale of magic in our time is as rich and complicated as sisterhood. From the first page, I felt drawn into a modern classic."
—Anna Godbersen, author of The Luxe, and Bright Young Things series

"I loved this book! Irena has created such a beautiful complete world-our world, and nestled within it, a simmering world of magic. The Hawkweed Prophecy has everything: friendship, desire, delicious earthy magic, secrets and spells, and at its centre, the wonderful young Poppy, on a journey of self-discovery."
—Karen Foxlee, author of Ophelia and the Marvelous Boy, and A Most Magical Girl

"The Hawkweed Prophecy was bewitching from the get-go. Irena Brignull does an amazing job weaving a tale of pure magic in this debut novel. She'll have you on a roller coaster of emotions from the very first page. Get ready to be spellbound."—Paige McKenzie, author of The Haunting of Sunshine Girl series

"Brignull develops story and characters slowly, long, luxurious sentences balancing the magic and the mundane expertly and building the world of the witches by showing how out of place Ember is in it. Tension builds inexorably to the inevitable witch showdown, which brings small victories but not a happily-ever-after for all. The third-person narration switches focus from character to character as they make frustrating, heart-rending, totally believable choices. Fantasy and nonfantasy readers alike will appreciate this gritty and intriguing coming-of-age story."
—Kirkus Reviews

"Brignull...debuts with an instantly engrossing novel...It's a fantasy with the air of a classic, yet one that's also entirely contemporary in its tight focus on identity, friendship, and romance. Ages 12-up."
—Publisher's Weekly Starred Review

"For fans of mysticism and witches, this is a must-buy."