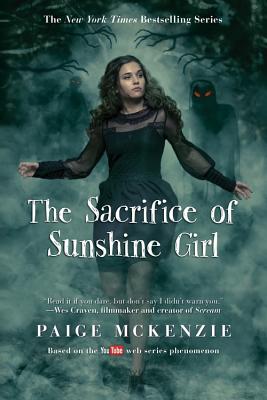 This is book number 3 in the The Haunting of Sunshine Girl Series series.

The final installment of the New York Times bestselling Haunting of Sunshine Girl trilogy (based on the hit YouTube channel, and in development for television) about a girl who can communicate with ghosts.

Is Sunshine Griffith who she thinks she is? Now that her luiseach powers are fully awakened, and having barely survived an abyss full of demons at the end of Book Two, Sunshine must figure out who-or what-has been organizing the forces of darkness against her.

Thanks to her brainiac boyfriend, Nolan, they not only unearth that Sunshine's death would trigger a calamitous event, but that all civilization depends on her survival. So when an unexpected event unleashes a fierce war between the luiseach and the demon army, Sunshine will learn a shocking truth about herself. Can she bring herself to make the ultimate sacrifice to save humankind?

Paige McKenzie, the irresistible face of The Haunting of Sunshine Girl, began playing Sunshine as a high school junior. Today, the YouTube series boasts a viewership over 230 million views and has also been adapted into film.

“Read if you dare!”
—Seventeen Magazine

“Love, betrayal, tortured choices and a fabulous vintage motorcycle all factor into this thrilling YA paranormal story. You may not be able to put this book down once you begin reading it. Take my advice: Start reading The Awakening of Sunshine Girl on a Friday night so you'll have fewer distractions over the next two days!
— Rochelle Campbell

“Sunshine's powers are unique. She doesn't just help humans transition to
the afterlife; her empathy allows her to feel connections to their whole lived experience, a power that proves both dangerous and useful… Sunshine continues to be a likable protagonist who strives to grow into herself and her unusual role in life. A cliff-hanger ending will have fans clamoring for the third installment.”
— Booklist

“Sunshine's story started as a YouTube series, and this creepy, suspenseful story condenses the plot of the original and offers a more polished voice than the videos. Existing fans won't be the only ones eager for more of this strong but vulnerable heroine just awakening to her potential.”
— Booklist (Grades 7-10)

“The plot moves along smoothly and rapidly, and the writing is graceful and wonderfully polished... It's hard not to finish The Haunting of Sunshine Girl.”
— Lev Grossman, Time Magazine

“This sometimes frightening tale and series opener is based on a YouTube channel of the same name, so transmedia fans can enjoy both formats. Readers who appreciated Holly Black's Doll Bones (2013) or Cassandra Clare's City of Bones series ... should consider picking up this creepy debut.”
— Julie Zimmerman, School Library Journal

“When teen prodigy Paige McKenzie sets her mind to do something, she does it big time. 200,000 active YouTube subscribers on her site and over 100 million views, for instance. Not bad for a kid who still gets carded and can't vote. So when she decided to write a scary book, she nailed that one too. By the end of the first chapter I turned on all the lights in the house, even though it was noon. And it wasn't long before I'd retreated into that last-resort safe room buried deep beneath my brain's Fear Center, praying the lock would hold. No such luck. Before I knew McKenzie was out there she'd hacked the door and let all manner of frightening things slither in to get me. ... Things that go bump in the night are afraid to read this book. Things that lurk beneath the bed cry for their mothers by page ten. McKenzie's skill telling the story of a young girl who inadvertently moves into a haunted house with her clueless mother is a thing that slips up behind and puts a cold white hand right down your spine and just won't let go. The book is called The Haunting of Sunshine Girl. Read it if you dare, but don't say I didn't warn you.”
— Wes Craven, Filmmaker


Praise for The Haunting of Sunshine Girl:

Praise for The Awakening of Sunshine Girl:

“If teens gobbled up the fast-paced, thrilling events surrounding Sunshine Griffith and her mother, Kat, in The Haunting of Sunshine Girl (Weinstein, 2015), they're sure to enjoy the new twists and turns of this latest series installment… McKenzie continues to write in an authentic teen voice that sucks readers in until the end. Fans ready to graduate from R.L. Stine's Goosebumps or those looking for a mix of Carolyn Keene's Nancy Drew and DC Comic's Scooby Doo will find just what they need in this paranormal series”
— School Library Journal

"For a truly 'adorkable' heroine and a lot of mischief and Monopoly-playing ghosts, pick this up!"
— Jessie Potts, USA Today

"The Haunting of Sunshine Girl by Paige McKenzie is based on the YouTube web series phenomena and will prove to be an enduringly popular addition to school and community library YA fiction collections."
— James A. Cox, Midwest Book Review

“The Haunting of Sunshine Girl has all the makings of a creepy story without being straight-up horror. The terrifying moments are strong and seamlessly handled. The reader is right there alongside Sunshine as she first doubts her own perceptions, then fearlessly makes friends with a ghost and resolves to save the day. Her relationship with her mom is touching and real, and her loyal friend Nolan is the perfect sidekick. Teens who loved Goosebumps will be spooked and satisfied by the adventures of Sunshine."
— Allison Chopin, New York Daily News

“The Haunting of Sunshine Girl starts with mysterious ghostly laughter late one night. The laughter quickly turns to horror. It seems Sunshine Griffith has moved into a house haunted by many evil spirits. Trust me - these spirits will haunt YOU, too. I was on the edge of my seat from the very first page.”
— R.L. Stine, author of Goosebumps and Fear Street

“Enthralling! Shivers of anticipation creep up and terrifying, ancient revelations come thick and fast. Sunshine Girl is a winner for fans of teen horror!”
— Anya Allyn, author of The Dark Carousel series

“Fans ready to graduate from R.L. Stine's “Goosebumps” (Scholastic) or those looking for a mix of Carolyn Keene's “Nancy Drew” and DC Comic's “Scooby Doo” will find just what they need in this paranormal series. ¬VERDICT Teens who enjoyed the previous volume or the author's YouTube channel will dive into this latest entry of ghost mischief.”
— Julie Zimmerman, School Library Review

“Sunshine's adventure is filled with bumps in the night and shadowy figures, alluding to a larger mystery and larger world that has plenty to offer imaginative readers who grew up on Goosebumps and the like. Suspenseful, exciting and endlessly entertaining.”
— Kirkus Review

"Paige McKenzie's outstanding fantasy action/adventure series will prove to be an outstanding and enduringly popular addition to community library collections."

"Paige McKenzie's third installment... is just as riveting and satisfying as its predecessors.... Its fast pacing, adventure, and complex characters will captivate readers of the YA, mystery, supernatural, horror, and adventure genres."