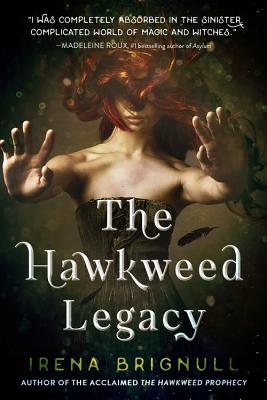 This is book number 2 in the The Hawkweed Series series.

From screenwriter Irena Brignull, the stunning sequel to her critically acclaimed YA debut, The Hawkweed Prophecy ("Full of romance, heart and suspense . . . completely absorb[ing]." -- Madeleine Roux) about a young witch forced to choose between love and magic.

Poppy is discovering a purpose for her powers in Africa, but she is haunted by a vision of her own death. Taken in by a boy and his great-grandmother, a healer, they vow to keep her safe-even if that ultimately means holding her captive. But Poppy never stops longing for Leo and, when she feels his magic begin to spark, she will do anything to be reunited with him.

Desperate to regain Poppy's trust and bring her home, Charlock embarks on a plan to reunite Leo with his mother. What Charlock doesn't foresee are the string of consequences that she sets into motion that leave Ember all alone and prey to manipulation, the clan open to attack from other witches, Sorrel vulnerable to Raven's ghost, Betony determined to protect her son from his father's fate, and which leave both Leo and Poppy in terrible danger.

Irena Brignull is an acclaimed screenwriter whose credits include The Boxtrolls and The Little Prince. Previously, Irena was a Script Executive at the BBC and then Head of Development at Dogstar Films, working on Shakespeare in Love, I Capture the Castle, and Bravo Two Zero among other films. She holds a BA in English Literature from the University of Oxford.

Praise for The Hawkweed Legacy:


"The real unbreakable bond in these stories is that between mother and child. Interesting and well written..."
—Kirkus Reviews

"Readers will be eager to keep turning pages in this rousing sequel."—School Library Journal

"I remain completely thrilled by this series. I feel like the best is still yet to come."—Read by Jess

"The language is both beautifully lyrical and smartly succinct, and the high-octane action is perfectly underpinned by elemental, archetypical concerns, among them love, loyalty, friendship, sacrifice and personal identity. This series surges adrenalin levels, and quickens the heart."

"Brignull does an exceptional job developing this emotional core of the series... Readers looking for a poignant story about belonging will find this a rewarding reading experience... a beautifully written novel about magic and the ties that bind."

"The connection between the two girls is just beautiful. Brignull has given us a gloriously refreshing homage to feminine strength... The twistiness to both of these books is intoxicating...deliciously dark and schemey."—Hana Banana Reads

"Irena's writing was magnificent and skilled... poignant... a beautiful tale of family, friendship and love in an original and modern fantastical setting."


—Never Judge a Book by Its Cover

Praise for The Hawkweed Prophecy:

"Wise, weird, a touch evil and totally charming, Irena Brignull's tale of magic in our time is as rich and complicated as sisterhood. From the first page, I felt drawn into a modern classic."
—Anna Godbersen, author of The Luxe, and Bright Young Things series

"Brignull's The Hawkweed Prophecy is a deft exploration of friendship, sacrifice, and betrayal. I can't decide who I love more, the sweet and trusting Ember or the spunky, dark Poppy. You can't help but cheer for both girls, and ache when they are pitted against one another. I was completely absorbed in the sinister, complicated world of magic and witches. The coven is described so confidently and beautifully, it's hard to emerge from the novelw ithout wondering if these women are operating somewhere just below the surface of our world. Full of romance, heart, and suspense, readers will find themselves staying up all night just to spend a little more time with Ember and Poppy."—Madeleine Roux, author of the Asylum series

"Irena Brignull's The Hawkweed Prophecy is a book of wicked, beautiful magic. Compulsively readable and delightfully gritty, one does not mess with these Hawkweed witches."—Kendare Blake, author of Anna Dressed in Blood, and Three Dark Crowns

"I loved this book! Irena has created such a beautiful complete world-our world, and nestled within it, a simmering world of magic. The Hawkweed Prophecy has everything: friendship, desire, delicious earthy magic, secrets and spells, and at its centre, the wonderful young Poppy, on a journey of self-discovery."—Karen Foxlee, author of Ophelia and the Marvelous Boy, and A Most Magical Girl

"The Hawkweed Prophecy was bewitching from the get-go. Irena Brignull does an amazing job weaving a tale of pure magic in this debut novel. She'll have you on a roller coaster of emotions from the very first page. Get ready to be spellbound."—Paige McKenzie, author of The Haunting of Sunshine Girl series

"Brignull...debuts with an instantly engrossing novel...It's a fantasy
with the air of a classic, yet one that's also entirely contemporary in
its tight focus on identity, friendship, and romance. Ages 12-up."—Publisher's Weekly Starred Review

"Brignull develops story and characters slowly, long, luxurious sentences balancing the magic and the mundane expertly and building the world of the witches by showing how out of place Ember is in it. Tension builds inexorably to the inevitable witch showdown, which brings small victories but not a happily-ever-after for all. The third-person narration switches focus from character to character as they make frustrating, heart-rending, totally believable choices. Fantasy and nonfantasy readers alike will appreciate this gritty and intriguing coming-of-age story."
—Kirkus Reviews

"From love, lies, loss and highs, The Hawkweed Prophecy delivers it all, and you won't see any of it coming."

"The Hawkweed Prophecy is as beautiful inside as it is out... Irena Brignull's writing is seamless... The atmosphere is dark, haunting, chilling with a dash of sunshine and fairy tale magic."

—Never Judget A Book By Its Cover

"Irena Brignull's debut novel...is a lyrical, poignant novel that examines what it means to belong, to have power, and to be a woman."

"I was bespelled way before the end."—Utopia State of Mind

"Action-packed from start to finish, this was the sequel that we needed."—Between the Pages

"I was entranced by the story of friendship and witchy sisterhood."
—The Bookish Beagle

"This beguiling magical tale and its strong female leads, full of betrayal, sorcery, and friendship, is spellbinding."—South Wales Evening Post