Unnecessary Roughness: Inside the Trial and Final Days of Aaron Hernandez (Hardcover) 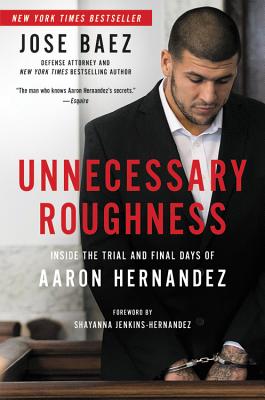 By Jose Baez, Shayanna Jenkins-Hernandez (Foreword by), George Willis (With)
$30.24

When renowned defense attorney Jose Baez received a request for representation from Aaron Hernandez, the disgraced Patriots tight-end was already serving a life sentence for murder. Defending him in a second, double-murder trial seemed like a lost cause--but Baez accepted the challenge, and their partnership culminated in a dramatic courtroom victory, a race to contest his first conviction, and ultimately a tragedy, when Aaron took his own life days after his acquittal.

This riveting, closely-observed account of Aaron's life and final year is the only book based on countless intimate conversations with Aaron, and told from the perspective of a true insider. Written with the support of Hernandez's fiancée, Unnecessary Roughness takes readers inside the high-profile trial, offering a dramatic retelling of the race to obtain key evidence that would exonerate Hernandez, and later play a critical role in appealing his first conviction.

With revelations about Aaron's personal life that weren't shared at trial, and an exploration of the Chronic Traumatic Encephalopathy diagnosis revealed by his autopsy, Jose Baez's Unnecessary Roughness is a startling courtroom drama and an unexpected portrait of a fallen father, fiancé, and teammate.

Jose Baez is one of the most sought-after attorneys in the country. He first gained national attention by successfully defending Casey Anthony in what became one of the nation's most sensational trials; his Presumed Guilty: Casey Anthony: The Inside Story was a national bestseller in 2012. Baez is the founder of The Baez Law Firm, and handles high-profile cases across the country. He lives in Miami, Florida.

An award-winning journalist, George Willis is a general sports columnist at the New York Post, where he has written extensively about the NFL, NBA, Major League Baseball, golf, professional boxing, and mixed martial arts. He previously worked at the New York Times, Newsday, and the Memphis Commercial Appeal. Willis is the author of The Bite Fight: Tyson Holyfield and the Night That Changed Boxing Forever. He lives in New Jersey.

"In Unnecessary Roughness: Inside the Trial and Final Days of Aaron Hernandez, the attorney who got Hernandez acquitted of a 2012 double murder squashes the rumor about the jailhouse letters, sheds fascinating new details about Hernandez's trade request to Bill Belichick, and describes Hernandez's final days as an inmate and later suicide victim."
—The Boston Globe

"This new book asks a lot of questions. Questions about [Aaron's] sexuality. Questions about his friends.... [W]hat did the Patriots know about Hernandez's past, and when did they know it? There seems little question he loved the Patriots.... Aaron Hernandez-the New England kid who... paid a very high price for those football dreams of his."
—The Providence Journal

"One of the best-known criminal-defense lawyers in America. . . The man who knows Aaron Hernandez's secrets."—Esquire