The Story of My Tits (Paperback) 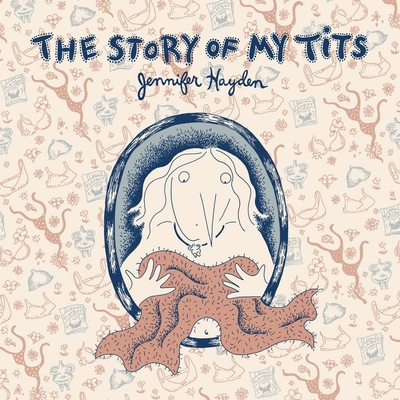 By Jennifer Hayden
$33.59
Not Available

"Truly moving. Hayden has created a heartfelt and often hilarious tribute to her life-and to the resilience of women everywhere." — Publishers Weekly (starred review)

Named one of Library Journal's BEST BOOKS OF 2015! A landmark work of graphic memoir and a cancer narrative that Gabrielle Bell (Lucky, Cecil & Jordan in New York, Everything is Flammable) calls, "comforting, straightforward and strongly connected to life." When Jennifer Hayden was diagnosed with breast cancer at the age of 43, she realized that her tits told a story. Across a lifetime, they'd held so many meanings: hope and fear, pride and embarrassment, life and death. And then they were gone. Now, their story has become a way of understanding her story.

For everyone who's faced cancer personally, or watched a loved one fight that battle, Hayden's story is a much-needed breath of fresh air, an irresistible blend of sweetness and skepticism. Rich with both symbolism and humor, The Story of My Tits will leave you laughing, weeping, and feeling grateful for every day.

Jennifer Hayden came to comics from fiction writing and children’s book illustration. Her most recent book, The Story of My Tits (Top Shelf, 2015), is a 352-page graphic memoir and breast cancer narrative. Her previous book, the autobiographical collection Underwire (Top Shelf, 2011), was excerpted in The Best American Comics 2013 and named one of “the best comics by women” by DoubleX. She is a member of Activate (the premier webcomics collective in New York City), where she posts her webcomic S’crapbook, which earned a Notable listing in The Best American Comics 2012. Jennifer currently posts the daily diary strip Rushes at thegoddessrushes.blogspot.com. Her comics have appeared in print anthologies such as The Activate Primer, Cousin Corrine’s Reminder, and The Strumpet.

After hours, Jennifer plays electric fiddle with The Rocky Hill Ramblers and The Spring Hill Band. She lives in Central New Jersey with her husband, their two college-age children, two cats, and the dog.

You can read her blog at goddesscomix.blogspot.com.

"Heartbreaking and riveting, Jennifer Hayden's caustic, sarcastic wit streams through her quirky drawings, unfolding a survivor's tale and so much more. The Story of My Tits takes us from her flat-chested adolescence to small-boobed acceptance, then loss — until the dramatic reconstruction of Jennifer herself." — Marisa Acocella Marchetto, author of Cancer Vixen and Ann Tenna

"The pacing of her storytelling is seamless... Hayden's memoir will resonate with anyone who has suffered loss and gone on to tell the tale." — Booklist