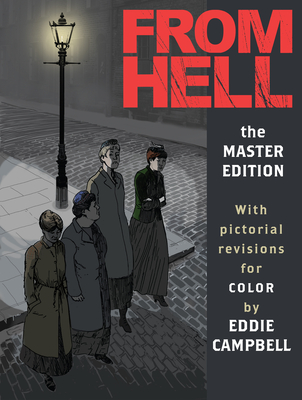 Meet the most notorious serial killer of all time, Jack the Ripper -- and meet the vast and vibrant communities of Victorian London where his foul deeds gave birth to the modern era. In this remarkable new edition, the award-winning bestseller FROM HELL now features astonishing colors by Eddie Campbell!

Jack is back -- and this time, the blood is red.

Experience FROM HELL as never before: fully restored and in color for the first time!

Five unsolved murders. Two of the greatest creators in the history of comics. One sprawling conspiracy, one metropolis on the brink of the twentieth century, and one bloody-minded Ripper ushering London into the modern age of terror. The award-winning bestseller FROM HELL, often ranked among the greatest graphic novels of all time, takes on haunting new dimensions in FROM HELL: Master Edition, enhanced with impressionistic hues by Eddie Campbell himself.

Award-winning author Alan Moore is widely considered the best writer of graphic novels in the medium's history. His body of work includes the groundbreaking graphic novels Watchmen, V for Vendetta, The League of Extraordinary Gentlemen, and Lost Girls, as well as the novels Voice of the Fire and Jerusalem and the poem The Mirror of Love. Among his many awards are the Hugo Award, the Locus Award, the Bram Stoker Award, the Eisner Award, and the International Horror Guild Award. He was born and still lives in Northampton, England.

Eddie Campbell is the award-winning cartoonist behind the autobiographical series Alec and the irreverent and wine-soaked series Bacchus, which together earned him the reputation as one of the great raconteurs in the medium of comics. His other collaborations with Alan Moore include The Birth Caul and Snakes & Ladders, two moving and personal poems adapted into comics. Eddie writes and draws from his home in Chicago, Illinois.

"My all-time favorite graphic novel … an immense, majestic work about the Jack the Ripper murders, the dark Victorian world they happened in, and the birth of the 20th century." — Warren Ellis, Entertainment Weekly

"Moore's works have often defied the public's expectations of the medium, and his most ambitious work, the massive graphic novel From Hell, is no exception. … The result is at once a meditation on evil, a police procedural and a commentary on Victorian England. … an impressive piece of work." — Patrick Day, The Los Angeles Times

"A massive exploration of the Jack The Ripper murders that incorporates British history, Masonic ritual, and London geography in a fascinating and horrifying conspiracy theory." — Tasha Robinson, The AV Club

"Moore, one of the great fiction minds of his generation, never accomplished anything more satisfying than this. Both creators are at the top of their game: Campbell's grubby lines are the perfect evocation of the horror of everyday Victorian life in the underclasses, while Moore's allegorical plotting — looping in the Royal family, Masonic occult ritual, the Elephant Man and the nature of London itself — makes for a hypnotic read and perpetual re-read." — Joe Gross, Rolling Stone

"Centered on the murders of Jack the Ripper, From Hell delivers a very frightening and suspenseful story that has captivated audiences for years." —CBR