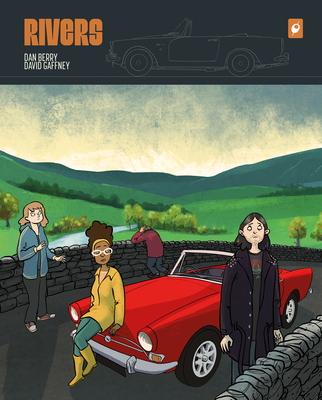 Three ordinary weirdos, one recurring dream. The acclaimed minds behind The Three Rooms in Valerie's Head return with a whimsical and ambitious portrait of human connection in the age of digital fragmentation.

You meet the strangest people on the internet.

Gideon is a lonely I.T. developer, obsessed by a comic book from childhood called Revenge of the Ghoulors, and secretly in love with his co-worker Lisa. Heidi works at home in her pyjamas, makes a lot of soup, and wishes she had time for friends. Peter is a 56-year-old divorcee who delivers classic cars, has a built-in toaster, and thinks a lot about the past.

These three people seem unconnected, yet they share something -- they each have the same recurring dream. And when a new web service is introduced that helps people share their dreams, what will happen when the three of them find out about each other? Just what is it that links these three lonely souls?

Nimbly weaving together multiple storylines (including extracts from Gideon's comic book, Revenge of the Ghoulors), Dan Berry and David Gaffney present Rivers: a quirky examination of how events from the past can bind people together forever, and a surprising reunion between people who've never met.

David Gaffney lives in Manchester. He is the author of the novels Never Never (2008), All the Places I've Ever Lived (2017), Out of the Dark (2020), plus the flash fiction and short story collections Sawn-Off Tales (2006), Aromabingo (2007), The Half-Life of Songs (2010), and More Sawn-Off Tales (2013). David's graphic novel with Dan Berry, The Three Rooms In Valerie's Head, was published in 2018 with Top Shelf and is currently being adapted for television. www.davidgaffney.org

Dan Berry is a cartoonist, illustrator and educator. He is the co-creator of the book The Three Rooms in Valerie's Head with author David Gaffney, and was nominated for an Eisner award for the anthology 24 by 7. He has been independently publishing his own comics for a decade. He is the host of the podcast Make It Then Tell Everybody. Between 2008 and 2019 Dan ran a university degree course in comics and graphic novels. He lives in Shropshire with his wife and two very rude children.