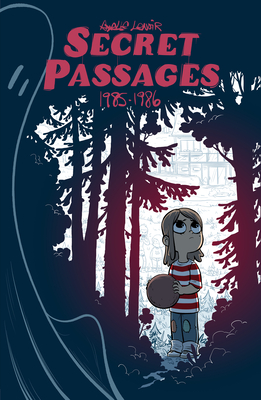 Welcome to an autobiography from another dimension. A wildly inventive cartoonist begins her imaginary memoir -- exploring the girlhood she never had.

Many LGBTQ adults look back on their youth and wonder: what might have been? Growing up “in the closet” tends to produce a sort of double identity, between the inner self and the self seen by the outside world. Now, cartoonist Axelle Lenoir, in her unpredictable and imaginative way, makes this metaphor real.

Secret Passages, narrated by the adult author, begins with the death of her (male) “cosmic twin.” From there it launches into a rollicking ride of childhood antics, set in 1985 small-town Québec. We get to know Axelle (a rebellious little girl who dreads Grade 1 and is captivated by the spooky forest near the house), her brothers (who share her off-the-charts enthusiasm for cartoons and toys), and their long-suffering parents (who may or may not be aliens).

These lively comic-strip style anecdotes, reminiscent of Calvin & Hobbes and packed full of pop-culture parodies, are juxtaposed with surreal twists as Axelle’s existential crisis mutates the narrative, building to a mind-bending climax.

Axelle Lenoir started out as a 2D artist in 1999, for a Quebec City video game company. In 2003, craving more creative freedom, she quit and made her first steps in comic books. Her Mertownville trilogy was released by the Switzerland publisher Paquet in the mid-2000s. Since then, Axelle has worked with publishers in France, Belgium, and Canada. Her first English-language graphic novel, Camp Spirit (Top Shelf), is a coming-of-age story about an unlikely friendship between two summer camp counselors. Her next book, a comic strip collection named What If We Were..., portrays two teenage girls who invented a weird and funny game to fill their spare time.