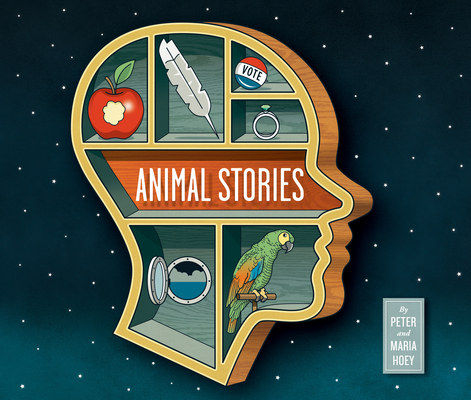 What separates us from animals? What connects us? Award-winning cartoonists Peter and Maria Hoey probe these mysteries across six surreal and interconnected stories.

After tremendous acclaim for their series Coin-Op Comics, two brilliant creators present their first graphic novel: a menagerie of wild tales. Pushing the boundaries of their dazzling and unique narrative style, Animal Stories weaves together six short stories exploring the mysterious relationships between humans and other animals.

A girl who keeps pigeons starts receiving messages from a new bird in her flock. A ship's crew rescue a dog, only to find far stranger things in the sea around them. A reincarnated cat with criminal intentions, a parrot who leads a revolution, and a squirrel who tempts a woman in a beautiful garden glade.

Brother and sister artists Peter and Maria Hoey live on opposite coasts but work closely together. Trading drawings back and forth from their studios in Northern California and New York. The Hoeys began writing and drawing comics in Blab! Magazine in the late 1990s, then launched their self-published comic book series, Coin-Op, in 2008. Their 2018 Coin-Op Comics Anthology, published by Top Shelf, earned a starred review from Publishers Weekly. Their self-published comics have been nominated twice for Eisner Awards. Animal Stories is their first full-length graphic novel.