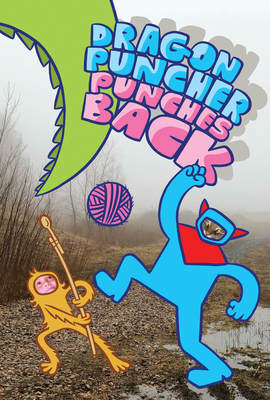 This is book number 3 in the Dragon Puncher series.

The world has been waiting a full decade for a new installment in this Eisner Award–winning series, and now it’s finally here! Let the battle begin…again!

The world’s cutest book series about a cat who punches stuff just got even cuter, because this time the dragon is a big, cute, baby one! Dragon Puncher’s human sidekick, Spoony, has got his fuzzy monster pajamas and a new-and-improved extra-long spoon, so he’s ready for anything. But Dragon Puncher mistakes a big ball of yarn for an evil dragon, which attracts the attention of a real dragon. Still, it doesn’t matter who started it. If you punch Dragon Puncher, then Dragon Puncher punches back!

James Kochalka is, without question, one of the most unique and prolific alternative cartoonists working in America today. His comics have been published internationally by nearly everyone from the smallest alternative publishers to some of the largest publishing houses on earth; he’s recorded several music albums under the name James Kochalka Superstar (in 2016, his song “Britney’s Silver Can” was named one of the 100 greatest songs of the year by Rolling Stone); and he’s developed animated cartoons for Nickelodeon and Cartoon Hangover. He is the first official Cartoonist Laureate of the state of Vermont, appointed in 2011. Among his best known works are the Monkey vs. Robot series, the beloved children’s series Johnny Boo, Dragon Puncher, Glork Patrol, and Banana Fox, and his magnum opus, the 14-year span of daily diary comics known as American Elf.