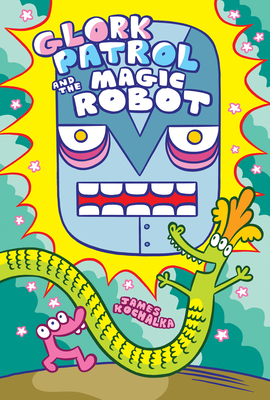 The Glork Patrol meets a TINY new friend… and a HUGE new enemy? Robots come in all shapes and sizes in this loony space adventure from the award-winning creator of Johnny Boo and Banana Fox!

A mysterious package arrives with a tiny robot inside, named Glorkbot. Say hello to the newest member of the Glork Patrol! But when Gonk and Baby Quackaboodle quickly deplete its batteries by making it do too many funny dance moves, there’s only one entity they can turn to for help: the giant floating head known throughout the galaxy as the Magic Robot. Will the Magic Robot heed their plea for help… or blast them with his laser eyes? This action-packed laugh-fest from Eisner award-winner James Kochalka is the goofiest sci-fi comic in the entire universe!

James Kochalka is, without question, one of the most unique and prolific alternative cartoonists working in America today. His comics have been published internationally by nearly everyone from the smallest alternative publishers to some of the largest publishing houses on earth; he’s recorded several music albums under the name James Kochalka Superstar (in 2006 his song “Britney’s Silver Can” was named one of the 100 greatest songs of the year by Rolling Stone); and he’s developed animated cartoons for Nickelodeon and Cartoon Hangover. He is the first official Cartoonist Laureate of the state of Vermont, appointed in 2011. Among his best known works are the Monkey vs Robot series, the beloved children’s series Johnny Boo, Dragon Puncher, Glork Patrol, Banana Fox, and his magnum opus, the 14-year span of daily diary comics known as American Elf.