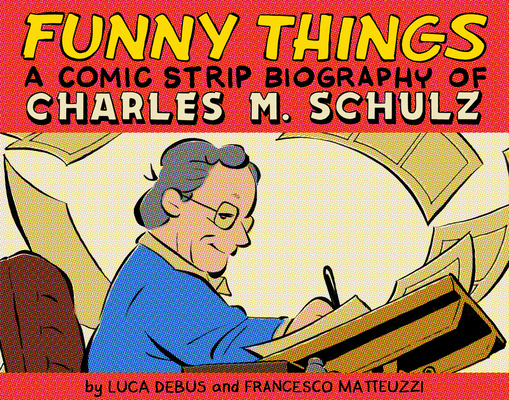 Discover the man behind Charlie Brown, Snoopy, and the Peanuts gang in this imaginative and tender-hearted tribute told in comic-strip format!

Charles M. Schulz was arguably the most influential and popular cartoonist of the 20th century, and he poured many of his own emotions and experiences into the world of Peanuts over its iconic 50-year run. Now, Luca Debus and Francesco Matteuzzi pay tribute to the master by telling the story of Schulz’s life in the medium that made him immortal: the comic strip. Every strip provides a laugh as well as a piece of insight into his remarkable life story. Starting with the last days of his monumental career, Funny Things jumps back and forth in time to narrate both Schulz’s artistic achievements and the personal episodes that formed him as an author and human being, ultimately shaping him into the most beloved cartoonist on the planet. Filled with affection, charm, and poignant insight, Funny Things imagines Schulz through the lens of the very world he created, inviting us all to meet the man behind the blanket.

Francesco Matteuzzi has written for many publishers including Sergio Bonelli Editore, DeAgostini, Mondadori and Centauria among others. He has authored many biographies into comics, and his works have been published in Italy, France, Germany, Czech Republic, Russia, Serbia and the United Kingdom.

Luca Debus works in the medium of comic strips for publications both online and on paper, both in Italy and internationally. He has studied the work of Charles M. Schulz for years and written numerous academic papers on the topic.