Photographic Card Deck of The Elements: With Big Beautiful Photographs of All 118 Elements in the Periodic Table (Cards) 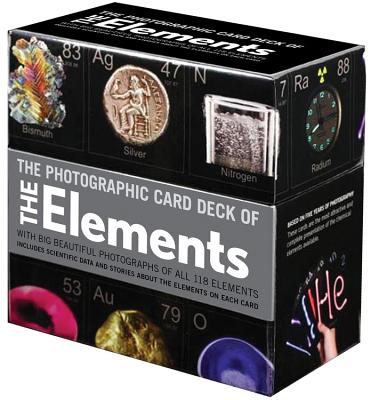 A companion to the bestselling book The Elements: A Visual Exploration of Every Known Atom in the Universe, this beautiful photographic card deck features all 118 elements in the periodic table. One element per card appears as a full-size image on the front and fascinating information about the element on the back.

The Photographic Card Deck of The Elements is the most detailed, lush, and beautiful set of cards ever produced on the subject of the periodic table. With 126, 5"X5" cards in all, it includes one card for every one of the 118 elements, plus additional cards that explain the arrangement of the periodic table, present the elements sorted by various properties, and suggest activities and uses for the cards.

The front side of each card shows a full-size, photographic image of the element, while the back gives scientific information including atomic weight, density, melting and boiling point, valence, and the percent of the element found in the universe, in the Earth's crust, in oceans, and in humans. Graphics show melting/boiling points, density, electron configuration, and atomic radius. A fascinating fact about the element, as well as the date of its discovery, is also included.

The cards are perfect for students but also make an excellent gift for a scientist or anyone who enjoys the beauty and diversity of the natural world.

Theodore Gray is the author of The Elements, Molecules, and Reactions, as well as Theodore Gray's Completely Mad Science. He is the creator of the bestselling iPad apps "Elements" and "Molecules," which have both been named "App of the Week" by Apple and was Director of "Disney Animated" (also honored by Apple as "iPad App of the Year"). Gray appeared on stage with Steve Jobs several times in his capacity as a software creator. He also co-founded Wolfram Research, Inc., makers of the widely-used software Mathematica and the Wolfram Alpha website. He lives in Urbana, Illinois.