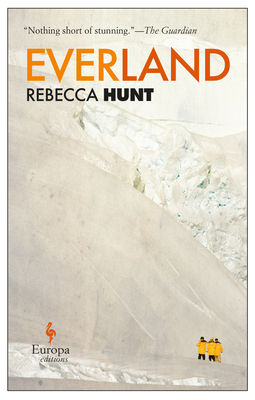 1913. Dinners, Millet-Bass, and Napps-three explorers bound not by friendship, but by a dependence founded on survival-volunteer to leave their ship, the Kismet, and scout an uncharted and unknown island in the Antarctic, which Napps names "Everland." While all three are enticed by the promise of adventure and reward, they are immortalized by the disastrous outcome of the expedition, their stories preserved for posterity.

2012. Brix, Jess, and Decker-three researchers with their own reasons for being so far from home-set out on a centenary field trip to survey the same island. Their equipment is more advanced than the previous group's, and their purpose more scientific, but the harsh weather of Everland remains an unpredictable and deadly force: the adventure and the danger are inescapable.

Under the harsh ultraviolet light of a sun which doesn't set, and isolated from the world, they begin to echo the expedition of a hundred years ago. History, it seems, has a way of repeating itself-when theirs is written, what will it say?

Rebecca Hunt is an artist and author living in East London. Her first novel, Mr Chartwell, was longlisted for the Guardian First Book Award. In October 2011, she was selected as one of 18 artists and writers to join the Arctic Circle residency, an annual expeditionary program aboard a traditional ice-class sailing vessel that voyages to the High Arctic.

“[Hunt] conjures the Antarctic convincingly not only in terms of the colors, shapes and textures of the place and its wildlife but also in its vastness and implacable indifference to human life and the passage of time."—The New York Times

"A fascinating story of lives stripped bare...and the decisions and their consequences that make us what we are."—The Observer

“Switching back and forth between the centuries, Rebecca Hunt unfolds these parallel stories with great verve. Her careful control of the narratives and dramatic pacing keeps the tension in each story escalating. She conjures the Antarctic convincingly not only in terms of the colors, shapes and textures of the place and its wildlife but also in its vastness and implacable indifference to human life and the passage of time.”—The New York Times Book Review

"Nothing short of stunning: an adventure story, a psychological investigation of physical and mental breakdown, and a remarkable account of weather and endeavor."—The Guardian

“It’s a remarkable, terrifying, physiological thriller full of natural description so accurate you’ll check your face for frostbite [...] A frightfully accurate portrait of men and women pushed to the brink of physical and mental anguish, “Everland” is a work that hits like a sudden winter storm, striking you breathless with its power, horror, and beauty.”—The Gazette

"The horrors of hunger, thirst and frostbite are grotesquely vivid. Most arresting of all is the mental turmoil, which moves from bitchy frustration to full-blown delirium via hope, despair, delusion and guilt with terrifying authenticity."—The Telegraph