Madness Rules the Hour: Charleston, 1860 and the Mania for War (Hardcover) 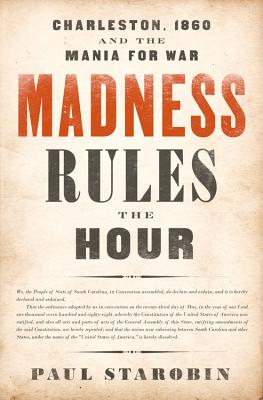 By Paul Starobin
$30.24
Not Available

From Lincoln's election to secession from the Union, this compelling history explains how South Carolina was swept into a cultural crisis at the heart of the Civil War.

In 1860, Charleston, South Carolina, embodied the combustible spirit of the South. No city was more fervently attached to slavery, and no city was seen by the North as a greater threat to the bonds barely holding together the Union. And so, with Abraham Lincoln's election looming, Charleston's leaders faced a climactic decision: they could submit to abolition -- or they could drive South Carolina out of the Union and hope that the rest of the South would follow.

In Madness Rules the Hour, Paul Starobin tells the story of how Charleston succumbed to a fever for war and charts the contagion's relentless progress and bizarre turns. In doing so, he examines the wily propagandists, the ambitious politicians, the gentlemen merchants and their wives and daughters, the compliant pastors, and the white workingmen who waged a violent and exuberant revolution in the name of slavery and Southern independence. They devoured the Mercury, the incendiary newspaper run by a fanatical father and son; made holy the deceased John C. Calhoun; and adopted "Le Marseillaise" as a rebellious anthem. Madness Rules the Hour is a portrait of a culture in crisis and an insightful investigation into the folly that fractured the Union and started the Civil War.

Paul Starobin is the author of Madness Rules the Hour: Charleston, 1860 and the Mania for War, praised by the New York Times as a "fast-paced, engagingly written account" of the hysteria that descended on Charleston, South Carolina, on the eve of the Civil War. He has been a frequent contributor to the Atlantic and is a former Moscow bureau chief for Business Week. He has written for other publications including the Wall Street Journal, Washington Post, City Journal, Politico, and National Geographic. He lives with his family in Orleans, Massachusetts.

"'Madness Rules the Hour,' Paul Starobin's fast-paced, engagingly written
account of the hysteria that descended on lovely Charleston--where the
unthinkable became the inevitable--is as much a study in group psychology as it
is in history...The conductors of this movement were the city's elite, whom
Starobin presents in finely drawn portraits."—New York Times Book Review

"A dramatic and engaging addition to Civil War studies that serves as a fitting bookend paired with Jay Winik's account of the end of the war, April 1865 (2001)."—Kirkus Reviews, STARRED REVIEW

"Starobin's narrative is readable and lively; he is skilled at creating setting and character description. Recommended for those interested in the Civil War and its causes.—Library Journal

"Charleston in 1860 was a lovely, civilized,
gracious city poisoned by tribalism, conspiracy theories, and the evil of
slavery. With a clear, sharp eye, Starobin takes us back to this strange time
and place and tells a riveting, tragic story."—Evan Thomas, author of Being Nixon

"'South Carolina is too small for a Republic,' wrote
James Petigru in 1860, 'but too large for an insane asylum.' Starobin has
skillfully chronicled the mass psychology in favor of secession that built to a
climax after Lincoln's election and led the state out of the Union."—James M. McPherson, author of Pulitzer Prize-winning Battle Cry of Freedom

"As the birthplace of disunion and the cradle of rebellion, the city of Charleston long claimed a perverse, myth-encrusted pride in launching a noble 'revolution' against 'Northern aggression'and federal overreach. Starobin has exploded this magnolia-suffused legend by convincingly portraying Charleston as a cauldron of disloyalty, extremism, and vicious white supremacy. Boasting fresh research and riveting characters, this vivid account of the feverish run-up to the Civil War sets the record straight with panache. The book should take its place as the definitive account of the hysteria that nearly destroyed, but in the end transformed, the United States."—Harold Holzer, winner of the Lincoln Prize

"This book is a gem-a tightly written account of
Southern 'war fever' in Charleston during the fateful year of 1860. This
terrifying and well-told tale reveals the viral power of hate, and how it can
crush a supposedly rational society in its grip."—Alex Beam, columnist for the Boston Globe andauthor of The Feud

"Charleston was the fuse
that exploded the powder keg of secession. Starobin's rich, sweeping portrait
of a city and its people on the brink brings us as close as possible to those
frightful, red-hot passions of that fateful time. This book has much to teach
us about the dangerous contagion spread by ideology and war fever."—Marc Wortman, author of The Bonfire and 1941