The Bone and Sinew of the Land: America's Forgotten Black Pioneers and the Struggle for Equality (Hardcover) 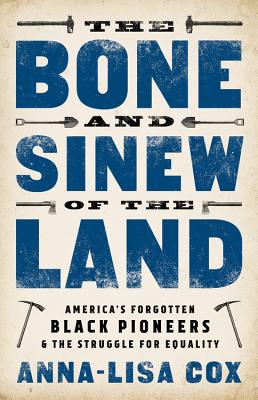 The long-hidden stories of America's black pioneers, the frontier they settled, and their fight for the heart of the nation

When black settlers Keziah and Charles Grier started clearing their frontier land in 1818, they couldn't know that they were part of the nation's earliest struggle for equality; they were just looking to build a better life. But within a few years, the Griers would become early Underground Railroad conductors, joining with fellow pioneers and other allies to confront the growing tyranny of bondage and injustice.

The Bone and Sinew of the Land tells the Griers' story and the stories of many others like them: the lost history of the nation's first Great Migration. In building hundreds of settlements on the frontier, these black pioneers were making a stand for equality and freedom. Their new home, the Northwest Territory -- the wild region that would become present-day Ohio, Illinois, Indiana, Michigan, and Wisconsin -- was the first territory to ban slavery and have equal voting rights for all men. Though forgotten today, in their own time the successes of these pioneers made them the targets of racist backlash. Political and even armed battles soon ensued, tearing apart families and communities long before the Civil War. This groundbreaking work of research reveals America's forgotten frontier, where these settlers were inspired by the belief that all men are created equal and a brighter future was possible.

Named one of Smithsonian's Best History Books of 2018

Anna-Lisa Cox is the author of A Stronger Kinship: One Town's Extraordinary Story of Hope and Faith, and an award-winning historian. Currently a fellow at Harvard University's Hutchins Center for African and African American Research, she also recently helped create two historical exhibits based on her original research at the Smithsonian's National Museum of African American History and Culture, including one on black pioneers.

"Tracing the free black families who settled the nation's first frontier, the great Northwest Territory, Anna-Lisa Cox convincingly shows that African American history has always been interwoven with the pioneer experience in America. At the same time, she reveals the blurred, often dangerous lines between freedom and bondage even in the territories that the Founding Fathers established from the beginning to be beyond the reach of America's original sin: slavery. In introducing us to the Grier and Lyle families, among others for whom land was the dream, Cox uncovers a rich history that may surprise even those most devoted to the study of African American history. The Bone and Sinew of the Land is a revelation of primary historical research that is written with the beauty and empathic powers of a novel."—Henry Louis Gates, Jr., Harvard University

"The journey of America's Black pioneers is a story that remains
unknown to Americans like the frontiers they settled. Starting in the earliest
days of the republic, these brave men and women built new lives far away from
the White enslavers who doubted them, threatened them, and attacked
them. This groundbreaking work of research is a beautifully written testament
to their bold courage, to their trailblazing strength."—Ibram X. Kendi, New York Times bestselling authorof Stamped from the Beginning

"Through ingenious research and a generous sensibility, Anna-Lisa Cox
captures the hidden stories of African American farmers who fought for equality
and justice against virulent white supremacy. Her heartfelt, lyrical narrative
brings the bones and sinews of black frontier families back to life, showing
how their idealistic struggles helped to shape the Midwest, and the nation."—Peter H. Wood, author of Black Majority and Strange New Land

"The Bone and Sinew of the Land unearths and shines a light on a crucial but untold African American and American history that parallels and complicates the well-known story of the Underground Railroad. Cox convincingly reframes the symbolic importance of American pioneers by proving how free black families and communities were shaping their own destinies in America's first frontier of the nineteenth century. Free black people were creating and framing their own destinies across a wide geography through a deep connection to land ownership and politics. This work will not only influence scholarship. It should also deeply shape public history and public conversations from local historic houses to sites to national institutions."—Paul Gardullo, curator, Smithsonian National Museum of African American History andCulture

"In this engrossing narrative, historian Cox restores
attention to the role of African-Americans in shaping both the frontier and
early- to mid-19th-century American political life... Cox's book tells a story
worth recovering, and it will interest anyone wanting to learn more about the
lives of free black Americans before the Civil War."—Publishers Weekly

"Recent scholarship on the history of slavery, white
supremacy, and domestic terrorism has expanded well beyond the bounds of the
South, and Cox has made an excellent contribution with her latest book... A
must-read for gaining a deeper understanding of the history of racism in the
Midwest, particularly present-day Ohio, Indiana, Illinois, Michigan, and
Wisconsin."—Library Journal

"The Bone and Sinew of the Land explores how black settlers, many of them slaves who had bought their freedom, settled in what is now the Midwest and established thriving farm communities that were threatened by violence and injustice."—Columbus Dispatch

"Today, evidence of the pioneering African-American presence exists only here and there in place names, still-functioning churches and local lore. The Bone and Sinew of the Land takes a step toward remembering it."—BookPage

"The Bone and Sinew of the Landis a valuable contribution toward understanding the complex history of race in America."—Shepherd Express