They Eat Puppies, Don't They?: A Novel (CD-Audio) 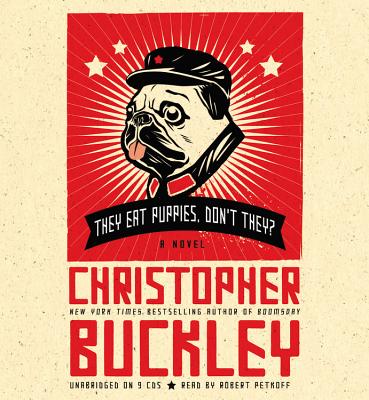 By Christopher Buckley, Robert Petkoff (Read by)
$33.58
Not Available

In an attempt to gain congressional approval for a top-secret weapons system, Washington lobbyist "Bird" McIntyre teams up with sexy, outspoken neocon Angel Templeton to pit the American public against the Chinese. When Bird fails to uncover an authentic reason to slander the nation, he and Angel put the Washington media machine to work, spreading a rumor that the Chinese secret service is working to assassinate the Dalai Lama.

Meanwhile in China, mild-mannered President Fa Mengyao and his devoted aide Gang are maneuvering desperately against sinister party hard-liners Minister Lo and General Han. Now Fa and Gang must convince the world that the People's Republic is not out to kill the Dalai Lama, while maintaining Fa's small margin of power in the increasingly militaristic environment of the party.

On the home front, Bird must contend with a high-strung wife who entertains Olympic equestrian ambition, and the qualifying competition happens to be taking place in China. As things unravel abroad, Bird and Angel's lie comes dangerously close to reality. And as their relationship rises to a new level, so do mounting tensions between the United States and China.

"Each of his novels may be light as air, but bit by bit they're building up into a significant social portrait, the beginnings of a vast Comédie-Washingtonienne . . . At a time of high political absurdity, Buckley remains our sharpest guide to the capital, and amore serious one than we may suppose."—Blake Wilson, New York Times Book Review

"As Jon Stewart proves, Washington is an easy target to satirize with its hypocrisy, ego-powered politicians and endless hot-air emissions. What sets Buckley apart is his ability to mock Washington yet convey a genuine admiration for many of its residents . . . Buckley remains hilarious."—USA Today

"Hilarious . . . full of wry observations on the follies of Washington high life. What makes it laugh-out-loud funny is Buckley's sense of how little you have to exaggerate to make Washington seem absurd."—New York Daily News

"You can't make this stuff up . . . Unless of course you are Christopher Buckley, son of the late William, whose fictional satires are must-reads for those looking to understand our cultural moment, or at least have a few laughs at it. Buckley is a master at cooking up scenarios that are wild without being entirely absurd and populating them with attractive characters."—Chicago Sun Times