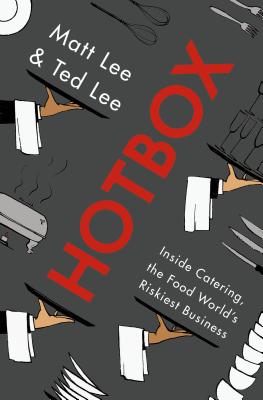 Matt Lee and Ted Lee take on the competitive, wild world of high-end catering, exposing the secrets of a food business few home cooks or restaurant chefs ever experience.

Hotbox reveals the real-life drama behind cavernous event spaces and soaring white tents, where cooking conditions have more in common with a mobile army hospital than a restaurant. Known for their modern take on Southern cooking, the Lee brothers steeped themselves in the catering business for four years, learning the culture from the inside-out. It’s a realm where you find eccentric characters, working in extreme conditions, who must produce magical events and instantly adapt when, for instance, the host’s toast runs a half-hour too long, a hail storm erupts, or a rolling rack of hundreds of ice cream desserts goes wheels-up.

Whether they’re dashing through black-tie fundraisers, celebrity-spotting at a Hamptons cookout, or following a silverware crew at 3:00 a.m. in a warehouse in New Jersey, the Lee brothers guide you on a romp from the inner circle—the elite team of chefs using little more than their wits and Sterno to turn out lamb shanks for eight hundred—to the outer reaches of the industries that facilitate the most dazzling galas. You’ll never attend a party—or entertain on your own—in the same way after reading this book.

Matt and Ted Lee are the authors of several bestselling cookbooks: Charleston Kitchen, Southern Cookbook, and Simple Fresh Southern. They have written for The New York Times, Food & Wine, Travel + Leisure, The New York Times Magazine, Gourmet, Saveur, and other publications, and have appeared on many TV shows, including Anthony Bourdain’s No Reservations and The Today Show. They have won six James Beard and IACP Awards.

Matt and Ted Lee are the authors of several bestselling cookbooks: Charleston Kitchen, Southern Cookbook, and Simple Fresh Southern. They have written for The New York Times, Food & Wine, Travel + Leisure, The New York Times Magazine, Gourmet, Saveur, and other publications, and have appeared on many TV shows, including Anthony Bourdain’s No Reservations and The Today Show. They have won six James Beard and IACP Awards.

"Hotbox is the Kitchen Confidential of the big-ticket catering world."
—The New York Times

"Lively...[with] just the right combination of sophistication and self-deprecation [to] show us what really goes on behind the scenes."
—The Wall Street Journal

"Fast and furious and funny, Hotbox digs deep into the messy, mad world of catering. It's an absorbing, immersive, appetizing tale, written with sharp intelligence and style."
—Susan Orlean, author of The Library Book

“Hotbox takes you from the frying pan into the fire. The cutthroat world of catered events come to life in this compelling book by the Lee Brothers.”
—Tom Colicchio

"Who knew that food improv was a thing? Hotbox is wicked and funny as hell. The Lee Bros. journeyed into the lowly outback of haute cuisine—catering—and came out with a new genre, food bouffe."
—Jack Hitt, author of Bunch of Amateurs

“A brilliant, gleeful, fly-on-the-lip-of-a-saucepan narrative, full of tips and secrets, and proof (yet again) that some of our greatest stories are in how we make food. You will never ever take a passed hors d’oeuvre for granted.”
—Bill Buford, bestselling author of Heat

"The Lee brothers...pull back the curtain on the catering world, an often-dismissed arm of the culinary industry denounced for its 'rubber chicken and dry salmon,' in this captivating tell-all.”
—Publishers Weekly

"Readers see behind the scenes of galas to show the conflict between sales teams and kitchen teams, understand the unique challenges of creating restaurant-quality food for a single evening, and meet the major players in the New York event world. The authors' reverence for caterers' work ethic comes through on every page. A mixture of history and memoir, the Lees' investigation offers insights into a segment of the food world that often deliberately keeps itself invisible."
—Booklist