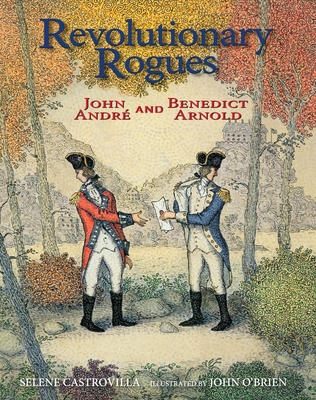 Young fans of the Broadway smash "Hamilton" will enjoy this riveting nonfiction picture book that unfolds like a play, telling a story from American history.

Gravely injured and with little chance for more military honors, Major General Benedict Arnold seeks reward and recognition another way. He contacts Major John André, the new head of British intelligence and another man determined to prove himself. Arnold and André strike a deal and use Arnold’s intelligence to take over West Point, the strategic American fort. The plan ultimately fails, leading to André’s capture and death and Arnold’s loss of reward and glory. Author Selene Castrovilla and illustrator John O’Brien brilliantly capture the tensions and high drama of these two revolutionary rogues by highlighting their similarities and differences and demonstrating how they brought about their own tragic ends. This title also includes an afterword, timelines of the lives of both men, an extensive bibliography, and a list of key places to visit.

Selene Castrovilla is an award-winning YA novelist and nonfiction author. She is the author of Revolutionary Friends and many other picture books on the American Revolution. She holds an MFA in creative writing from New School University and a BA in English from New York University. Selene lives on Long Island, New York with her two sons, where she writes year-round. Visit selenecastrovilla.com.

John O’Brien has illustrated more than one hundred children’s books, including Thomas Jefferson Builds a Library. He has also contributed cartoons to The New Yorker since 1987. He lives in Delran, New Jersey, and winters in Miami, Florida. Visit johnobrienillustrator.com.

"The illustrations... are stellar...a volume that young history buffs will find absorbing. A visually exciting introduction to a famous spy case and a name synonymous with 'traitor.''  -- Kirkus Reviews

"In short, dramatic scenes, this title by the author of Revolutionary Friends...presents the story of two notorious Revolutionary War soldiers. The straightforward narrative alternates between the viewpoints of British major John André and American major General Benedict Arnold...At each turn along the road to treason, Castrovilla shines a light on the motivations and conflicted emotions of André and Arnold...The ink and watercolor illustrations set the scene in careful detail...(and) call to mind old-fashioned woodblock prints...Future historians will enjoy this psychological chronicle of how Arnold plotted with André to betray his fellow patriots." – School Library Journal

"No name in the annals of U.S. history is more synonymous with treachery and betrayal than Benedict Arnold. This in-depth look at Arnold's personality, rooted heavily in primary source materials, creates a far more complex portrait than the one provided by most textbooks...(with) countless opportunities for critical thinking and discussion. With colorful illustrations and insightful observations, books like this one make the names recorded in history much more human." - Booklist