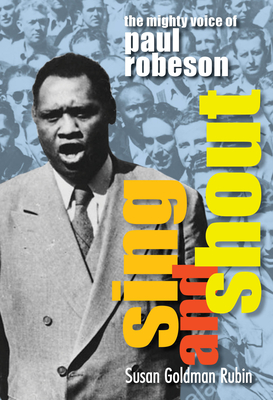 This comprehensive biography explores the tumultuous and passionate life of activist, singer, and actor Paul Robeson.

When faced with the decision to remain silent or be ostracized, Paul Robeson chose to sing, shout, and speak out. Sing and Shout: The Mighty Voice of Paul Robeson explores how Robeson's love of African American spirituals and deep empathy towards the suffering of others drove his long, fervent mission as a civil rights activist and his career as an artist. Although he was also an actor, singing was Robeson's defining talent and where he could best express himself. After exploring socialism, Robeson was targeted by the U.S. government for speaking out about discrimination against African Americans and for his political views. He was labeled a communist during the height of the Cold War and found himself stripped of his U.S. passport. But Robeson never gave in and continued to perform and speak out. The book is based on author Susan Goldman Rubin's extensive research, including fieldwork in Harlem, NY, in Princeton and Somerville, NJ, and at Rutgers University in New Brunswick, NJ. Includes an author's note, resources, source notes, index, and a preface by author Harry Belafonte.

Susan Goldman Rubin grew up in the Bronx and dreamed of becoming an artist. She illustrated her first three picture books, but then turned to writing nonfiction, mainly about art and history. She is the author of more than fifty-five books for young people and lives in Malibu, California, where she has been an instructor in the UCLA Extension Writers' Program for 20 years.

"Rubin (Give Us the Vote!) skillfully recounts the life of outstanding student, athlete, actor, singer, and social activist Paul Robeson (1898–1976), interlacing narrative of his artistic career with commentary on his position on and accomplishments as a champion for black rights. During the 1930s, Robeson increasingly used his prominence to criticize fascism and advocate for human dignity. His activism attracted unfavorable attention from the FBI, which rescinded Robeson’s passport. A lifelong nonconformist, Robeson brought joy to audiences and inspired a generation of civil rights leaders. Rubin appends a comprehensive bibliography, listing of Robeson’s music, and Harlem walking tour recommendations to her sympathetic, lucid portrait of a great voice." -- Publishers Weekly

"A veteran author for younger readers, Rubin provides a meticulously researched biography that integrates numerous archival images. This offering foregrounds Robeson as a powerful, studied voice of Negro spirituals, a black folk music tradition rich in religious symbolism that arose in response (and resistance to) enslavement in the U.S. Rubin lays out Robeson’s lifelong evolution on a number of personal and political issues in dialogue with his wife, Eslanda, and other noteworthy figures. Readers can expect to sit with these lessons from the committed life of one of the 20th century’s most resonant voices. A rigorous, relatable text about one of America’s all-time entertainers and social activists." —Kirkus Reviews

"The opening vignette in Rubin’s detailed look at a Renaissance American shows Robeson performing in 1925’s 'music event of the year.' The wildly acclaimed concert was just one triumph in the life of this remarkable performer, sportsman, civil rights champion, and son of a runaway enslaved man. Rubin presents Robeson’s life in short chapters starting with his childhood...and continuing through his life as a young father...to his controversial life as an outspoken critic of conditions for African Americans. (T)he writing...is complemented by clearly reproduced black-and-white images of Robeson, his family, and others, which help bring the era to life. More than 50 pages of back matter...extensive notes, create opportunities aplenty for further research. A quality choice for history and biography shelves." —Booklist

"Readers of this thorough biography might ask themselves, 'Is there anything Paul Robeson couldn’t do?' Robeson gained fame with his marvelous singing voice, performing spirituals in concert, acting in plays, and appearing in hit films. He aimed to portray dignified African Americans...at a time when roles for people of color were relegated to degrading stereotypes. As time went on, he devoted more energy to speaking out about civil rights. Robeson never stopped fighting against injustice. Middle and high school students will find inspiration in the life of this fascinating figure in African American history." —School Library Journal