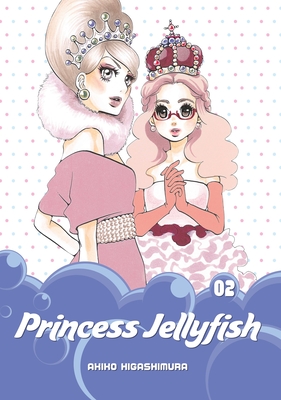 This is book number 2 in the Princess Jellyfish series.

Named by the American Library Association and the New York Public Library as one of the top young adult books of the year!

ARMED WITH STYLE
With the geeky paradise of Amamizu-kan threatened by redevelopment plans, Tsukimi and the Amars must spring into action. Buy the wily Inari and her hold on Shu forces Kuranosuke to pull out all the stops: money, blackmail, and...fashion?! Though Amamizu-kan still struggles with Kuranosuke's stylish ways, the neighborhood fashionista has too much to lose, whether it's a hidden identity or priceless friendships. Tsukimi gets the chance to make her jellyfish dreams into a glamorous reality, but that means breaking out of her bubble! Can these misfit princesses save their castle?

Praise for Princess Jellyfish and the hit anime!

"One of the best anime and manga for beginners. Enthusiasm—geeky and otherwise—is power in Princess Jellyfish. Enthusiasm saves the day and paves the road to the future." - Kotaku

"Princess Jellyfish's ambition is simple: to tell a delightful story in a delightful way... It's a pretty deadly one-two punch." - Anime News Network

One of Japan's most popular authors of manga for women, Akiko Higashimura has created more than a dozen series, including Kakukaku Shikajika and Mama's A Temparist. After its adaptation into a popular anime and live-action film, Princess Jellyfish is her first work to be released in English, making her one of the Japanese manga world's best-kept secrets.