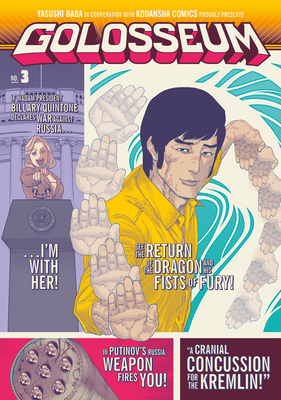 This is book number 3 in the Golosseum series.

ALL RIOT ON THE EASTERN FRONT

The prime minister of Japan barges in on President Putinov for an informal meeting, and the diplomatic ties between two powerhouse nations quickly devolve into a no-holds-barred, bareknuckle free-for-all! This outrageous breach of etiquette winds up setting off a world war of epic proportions as Japan and the USA flex their power and biceps against Greater Russia and Putinov's arsenal of brawny superhumans. But while the world erupts in a musclebound melee, behind the scenes, both sides are scrambling to get their hands on the final golden record, which could hold the secret to a weapon to outclass even the legendary peacemakers. However, the record has been safely hidden by the mad monk Rasputin, and whoever wants it will have to contend with the White Witch, Ryuzo Hijikata, and the new and improved Li Yan-Long.

Creator of the comedy manga Lizard King and the martial arts manga Karate Shoukoushi Kohinata Minoru, Baba Yasushi put both those genres to work in Golosseum, his first manga to be published in English.