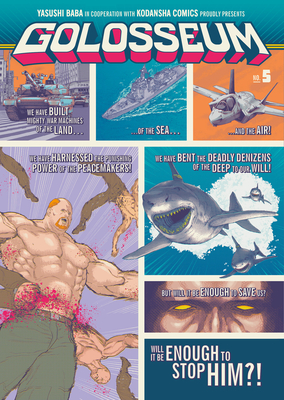 This is book number 5 in the Golosseum series.

CARVE OUT A VICTORY AT DAWN'S HORIZON!

Greater Russia and its indomitable New Baltic Fleet breach Japanese waters, and as tensions transform into an all-out war, it seems as if Putinov will sink the entire island of Hokkaido to get his hands on the final record. But standing in his way are Rasputin and his team of fighters as well as a few new recruits in the fight against Putinov's "peaceful" invasion. However, Greater Russia is not the only nation vying for the secrets of the final record--the U.S. Pacific fleet led by the U.S.S. Missouri and America's strongest warriors also join the battle with a secret weapon of "epic proportions"...

Creator of the comedy manga Lizard King and the martial arts manga Karate Shoukoushi Kohinata Minoru, Baba Yasushi put both those genres to work in Golosseum, his first manga to be published in English.