Legends of the North Cascades (Paperback) 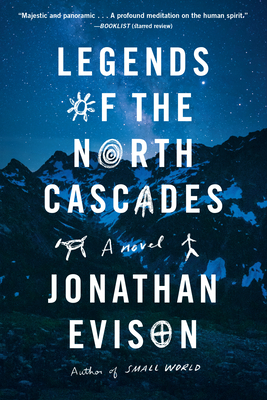 “A beautifully rendered and cinematic portrait of a place and its evolution through time . . . A story of survival and the love and devotion between parent and child.”
—Jill McCorkle
, author of Hieroglyphics

Dave Cartwright used to be good at a lot of things: good with his hands, good at solving problems, good at staying calm in a crisis. But on the heels of his third tour in Iraq, the fabric of Dave’s life has begun to unravel. Gripped by PTSD, he finds himself losing his home, his wife, his direction. Most days, his love for his seven-year-old daughter, Bella, is the only thing keeping him going. When tragedy strikes, Dave makes a dramatic decision: the two of them will flee their damaged lives, heading off the grid to live in the wilderness of the Pacific Northwest.

As they carve out a home in a cave in that harsh, breathtaking landscape, echoes of its past begin to reach them. Bella retreats into herself, absorbed by visions of a mother and son who lived in the cave thousands of years earlier, at the end of the last ice age. Back in town, Dave and Bella themselves are rapidly becoming the stuff of legend—to all but those who would force them to return home.

As winter sweeps toward the North Cascades, past and present intertwine into a timeless odyssey. Poignant and profound, Legends of the North Cascades brings Jonathan Evison’s trademark vibrant, honest voice to bear on an expansive story that is at once a meditation on the perils of isolation and an exploration of the ways that connection can save us.

Jonathan Evison lives with his wife and family on Bainbridge Island, near Seattle, WA. Legends of the North Cascades is his sixth novel.

“What a great storyteller [Evison] is . . . After exploring themes of what it is to be human, this tale has a very satisfying ending.”
—San Diego Tribune

“Evison’s majestic and panoramic latest conjures the beauty, power, and unforgiving nature of the Cascade Mountains in alternating narratives separated by thousands of years. Evison masterfully delivers a subtle yet pointed commentary on how society marginalizes veterans and how we profess to admire yet distrust the individualist ethos while also offering a profound meditation on the human spirit.”
—Booklist, starred review

“Only a writer of Evison’s talent could so brilliantly weave the struggles of a PTSD-stricken veteran and the ghosts of an ancient family into such a powerful social commentary. Wildly original and breathtakingly big-hearted.”
—Willy Vlautin, author of Don’t Skip Out on Me

“Engaging . . . This modern back-to-the-land story feels like John Krakauer’s Into the Wild meets Jean M. Auel’s Clan of the Cave Bear, a combination that makes for a compelling read in its appreciation of the monumental properties of nature and recognition of the history of humans in the North Cascades.”
—Library Journal

“Under the daunting and impassive mountains of the title, two dramas, one ancient and one contemporary, intertwine to become a greater story of parent and child attempting to survive in the harshest of circumstances. For me, the heart of this fine novel is Bella, a young heroine whose courage and steadfastness are a timely reminder of how human decency can prevail in the darkest of situations.”
—Ron Rash, author of Serena and In the Valley

"Evison weaves the prehistoric past and the troubled present together with imagination and tenderness in this haunting, timely meditation on the redemptive power of love.”
—Hillary Jordan, author of Mudbound

“Jonathan Evison’s Legends of the North Cascades is a beautifully rendered and cinematic portrait of a place and its evolution through time; it is also—pure and simple—a story of survival and the love and devotion between parent and child.”
—Jill McCorkle, author of Hieroglyphics

“Evison (Lawn Boy) delivers an intimate . . . story of grief and parenthood with characters from two distant millennia . . . Evison's empathetic vision offers much to consider about the limits of parental authority and the capacity for both physical and emotional survival.”
—Publishers Weekly