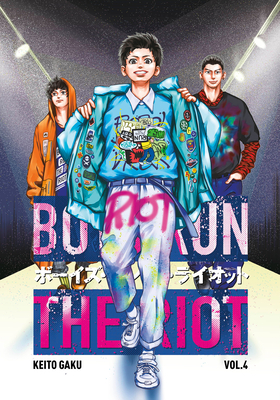 A transgender teen named Ryo finds an escape from the expectations and anxieties of his daily life in the world of street fashion. This personal, heartfelt, fictional story from a transgender manga creator made waves in Japan and will inspire readers all over the world!

RIOTS ARE ALL THE RAGE

Now that the drama with Tsubasa has cooled down, Ryo is living out and proud at school, and he and his friends are back on track to create new designs for Boys Run the Riot. While doing so, Ryo bumps into a fan named Joe, who has been running his own fashion brand for 20 years. Under his tutelage, Boys Run the Riot gets put to the test to think up their brand message, motif, and concept…in order to prepare for their brand’s debut at Joe’s exhibition! Meanwhile, Ryo and Jin must decide whether to hide from their families, or invite them along to the exhibition and reveal their true selves… The boys who once dreamed of changing the world with their clothes are now ready to take the stage, and they’re not exiting without causing a riot!

Keito Gaku is a manga artist and transgender man living in Japan. Gaku is winner of the 77th Tetsuya Chiba Prize. His debut manga series and first work to be published in English is Boys Run the Riot.