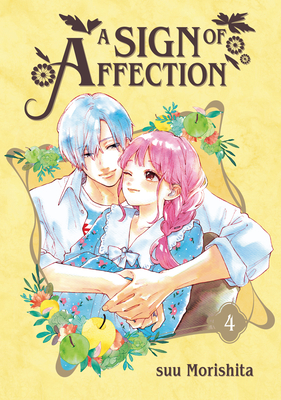 This is book number 4 in the A Sign of Affection series.

Yuki is a typical college student--it's just that she can't hear. A chance encounter on a train leads to a serious crush...but will he give her a chance? A sweet and relatable manga romance from the creator of Shortcake Cake!

“I wish Itsuomi-san would take me into his world…”

Yuki, a deaf college student who’s led a relatively sheltered life, has just taken a huge step: She’s got a boyfriend! And he seems like a keeper: Itsuomi is a multilingual globetrotter who works hard, and he’s a knockout, to boot. Yuki can still scarcely believe that Itsuomi casually dropped the question, “Wanna go out with me?” And she can’t help wondering, when will Itsuomi start to open up to her about his past, and his dreams for the future? Is this a whim, or is it real?

From the acclaimed author of Shortcake Cake, the hit shojo series with more than a million copies in print, this new work is full of real-life details about Japanese sign language and living without hearing, and it's sure to please fans of romantic stories like A Silent Voice, Kimi ni Todoke, and Love in Focus!

One of the most prolific and successful shojo manga creators of the last decade, suu Morishita's English-language debut was Shortcake Cake, which has more than one million copies in print worldwide. Morishita's second series to be released in English is A Sign of Affection.