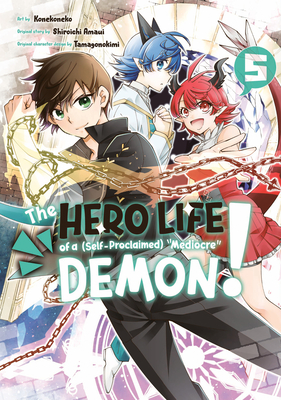 He may look like nothing but a country boy, but Chrono Alcon is actually one of the most powerful demons the world has ever seen! All he's interested in is attending school like any other kid, but when the Demon King finds out about Chrono's power, he'll have to spend his days studying, and his nights in the dungeons, fighting monsters...?! The hit fantasy adventure manga comes to print, perfect for fans of Goblin Slayer, The Rising of the Shield Hero, and That Time I Got Reincarnated as a Slime!

Chrono Alcon, a young demon, traveled from his sleepy village to study at a prestigious magic school connected to the Demon King's Castle itself. In this world, "demons" take many shapes: wolfmen, hellhounds, vampires, even dragons! Chrono himself is a "jinn," but he looks like an unassuming young boy, and his classmates dismiss him as a pushover... until his groundbreaking performance in his first test attracts the attention of not only his (gorgeous) classmates, but the Demon King herself!

The online sensation finally gets a physical release!

Novelist and manga author Shiroichi Amaui debuted in 2015 with Demon Lord's Pet and the light novel series When My House Was a Magic Power Spot. The Hero Life of a (Self-Proclaimed) Mediocre Demon is Amaui's first manga and first work released in English.

Konekoneko is a manga artist whose debut, The Hero Life of a (Self-Proclaimed) Mediocre Demon, is being published in English in print and ebook formats by Kodansha Comics.

Tamagonokimi's designs and illustrations have appeared in dozens of manga and light novels, including The Hero Life of a (Self-Proclaimed) Mediocre Demon, now being published in English in print and ebook formats by Kodansha Comics.