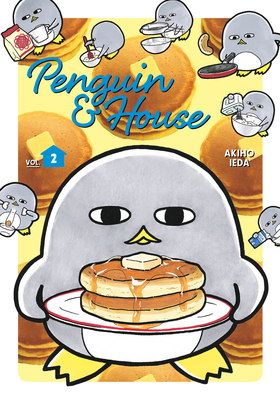 This is book number 2 in the Penguin & House series.

Pen is a penguin. His favorite things are pancakes and fastidious household upkeep. Pen lives in the city with his friend Hayakawa, a human. They can't communicate in words, so the only way for Pen to express his love is by doing laundry and getting good deals at the supermarket. This is a chronicle of their life together--let it snuggle on your shelf next to A Man and His Cat or Way of the Househusband!

Pen the Penguin spends his days full of cooking and cleaning, snacking
and learning. No matter where Hayakawa the Human goes, Pen’s not far behind, whether it’s a fashion show at the mall or a snowy ski trip. One day, a new pet penguin, Madeleine, and her human appear... But why would this high school girl—or anyone!—have a crush on Hayakawa?

Manga artist Akiho Ieda debuted in 2014 with the series Very Well Done. Ieda's first series to be released in English is Penguin & House from Kodansha Comics.