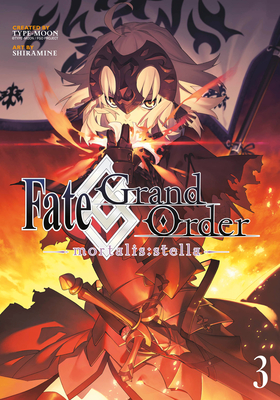 This is book number 3 in the Fate/Grand Order (Manga) series.

The official manga adaptation of one of the most popular mobile games in the world makes its long-awaited return with Vol. 2! Continue the time-traveling fantasy story that has enthralled millions, in a new adaptation from Shiramine, the artist behind Tales of Zestiria!

The Star That Guides Them


Jeanne d’Arc’s flag flies high above France once more—but is it a flag of justice, or oppression? With the Dragon Witch Jeanne d’Arc still at large, Ritsuka, Mash, and the real Jeanne d’Arc join forces with new servants Marie Antoinette, Wolfgang Amadeus Mozart, and Elisabeth Báthory and  head for the witch’s castle in Orléans. With France’s history and humanity’s future on the line, can Ritsuka and Mash put an end to the evil Dragon Witch’s reign of terror? Just what sort of outcome awaits them at the end of this singularity, and when—and where—in history will they go next…?

The official adaptation of the TYPE-MOON phenomenon that has become one of the most popular mobile games in the world!

TYPE-MOON is the studio behind the multimedia Fate/ franchise, with dozens of visual novels, anime, manga, and more.