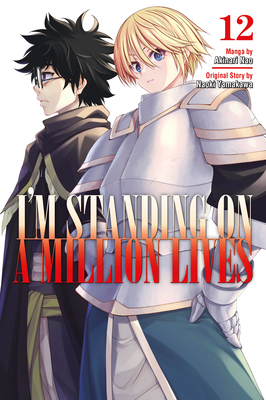 The provocative action manga that's about to become a major anime! A teenage loner gets transported into a fantasy world with his two scary female classmates. The girls find themselves as a wizard and a warrior, but he's woken up as... a farmer?! How will be become a hero now? A new fantasy perfect for fans of Sword Art Online and That Time I Got Reincarnated as a Slime!


A group of mighty Cathean monks has arrived, and they join Yotsuya and the rest of the party to finally kill the dragon that’s plagued the kingdom. Something goes awry, however, and when the smoke clears, Habaki Futashige is the only player left standing. Now it’s up to the man who believed himself a loser back on Earth to step up and clear the quest before time runs out!

Akinari Nao is a manga artist who debuted in 2006 with the manga adaptation of the light novel series Psycho Busters. Nao later illustrated the original manga Trinity Seven, which was adapted into light novels and a hit anime in 2014. I'm Standing on a Million Lives is Nao's first manga to be published in English.