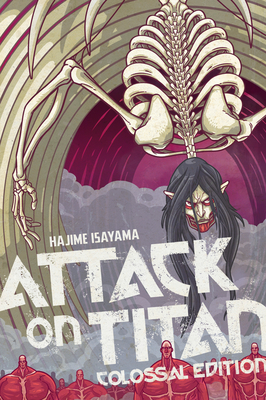 This is book number 7 in the Attack on Titan Colossal Edition series.

Contains the FINAL VOLUMES of Attack on Titan in an extra-large size, on premium-quality paper!

END OF AN ERA

Determined to protect his beloved home of Paradis, Eren uses the Founding Titan’s power to rouse a parade of massive Titans from their centuries-long slumber, breaking free of the Walls to answer their founder’s call—to wipe out all of humanity. Though once hailed as humanity’s greatest hope, the Attack Titan has now morphed into a grotesque, colossal skeleton of its former self, with Eren long unrecognizable as a friend, a brother, a savior…and soon indiscernible from a devil. Now, Mikasa, Armin, and the surviving members of the Survey Corps must band together with their sworn enemies to stop the Rumbling and Eren once and for all. Will their attack finally put an end to the Titans, or will the cycle of fear, oppression, and destruction only continue?

Hajime Isayama is the author of the global megahit manga Attack on Titan, his debut work.