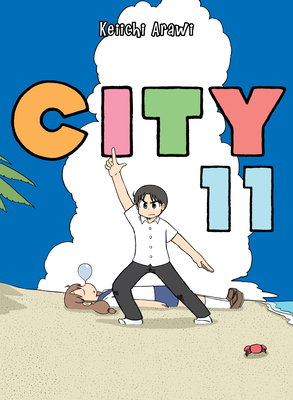 By Keiichi Arawi
$12.95
Not Available

This is book number 11 in the City series.

From Keiichi Arawi, the creator of hit series nichijou, comes a new slapstick comedy series about a penniless college student who moves to a town filled with bizarre people. This reckless girl will be the one who eventually sets the city in motion.


Riko Izumi is about to go on the greatest adventure of her life—and she won’t even remember it! Tatewaku’s crush gets him into hot water, cold water, and every kind in between as he tries to keep her safe, and maybe even get her to reciprocate his feelings.
Love! Friendship! Death! Robots! Pirates! Extraterrestrial cephalopods! Pop songs! Welcome to the most epic volume of CITY ever, at least since the last one. Keiichi Arawi takes us out of the CITY and on a high-seas adventure that no one will ever forget (except Riko).

His short "Nichijou" won Kadokawa's 22nd ACE Award for New Artists and by November 2006 Nichijou was regularly serialized in Kadokawa's flagship magazine Shonen Ace. Nichijou has since then sold more than a million copies and has seen cartoon and video game adaptations.