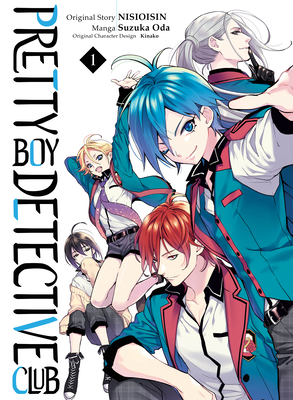 A mysterious group known as the Pretty Boy Detective Club is rumored to solve (and perhaps cause) most of the trouble at Yubiwa Academy—in a strictly unofficial, undercover, uncommercial capacity, of course. In order to find a star she glimpsed ten years ago, second-year Mayumi Dojima enlists the Pretty Boy’s aid, and gets much more than she bargained for! When they run up against a shadowy organization called the Twenties, stargazing is suddenly the least of their worries. Mayumi’s entire future is in jeopardy, and the Pretty Boy Detective Club must race to solve the Mystery of the Dark Star before time runs out!

Born in 1981, NISIOISIN dropped out of Ritsumeikan University in Kyoto to pursue a career in story-telling. After submitting numerous manuscripts, he won the 23rd Mephisto Prize for his mystery novel Kubikiri Cycle at the age of 20.
Since that 2002 debut, NISIOISIN has penned more than 100 novels across numerous series, in addition to a number of comics and tv scripts. He has been hailed for breaking down the barrier between so-called "light novels" and mainstream literary fiction, and is one of Japan's best-selling author's in recent memory, ranking in the top 10 from 2009-2016 and topping that list in both 2012 and 2014.
His best known works are the massively popular Monogatari, Zaregoto, and Katanagatari series, all of which have been adapted into television anime. An animated series of The Pretty Boy Detective club is set to air in both Japan and the US.
Nishio's works often cover themes of youth, but are framed in genres that are familiar to the masses. His works tend to mix mystery with comedy and touches or romance and/or the supernatural. He is a modern author in every sense, sometimes even experiementing with the Japanese language itself.
Many of his works have been adapted into animated television series and films. His best known works are the Monogatari series and Katanagatari.