To the Abandoned Sacred Beasts 13 (Paperback) 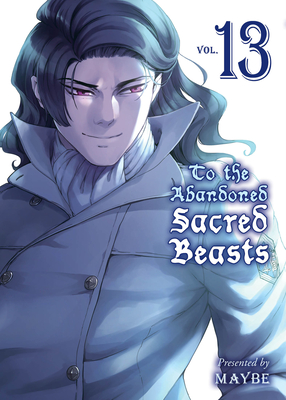 This is book number 13 in the Sacred Beasts series.

Hank travels in search of Cain, who proceeds with the Incarnate research that Elaine left unfinished. Schaal, held captive by Cain, learns about her power and must choose whether to sacrifice herself for the future of the Incarnates. Meanwhile, Claude searches for his own way to protect the nation and its people as the Northern Union of Patria prepares for war.Each of their paths comes winding back together as the story heads for its grand finale...

MAYBE is a two-man cartooning team based out of Japan. According to reports both members were born in 1984, and they broke into the world of comics by debuing with indie publisher Okura Publishing in 2005. MAYBE would continue to work in the world of indie comics for a few years, eventually making a name for themselves with Wani Magazine's Comic Kairakuten.

In 2006 the pair broke through into the mainstream by getting picked up by beloved shonen publisher Akita Shoten (publishers of Black Jack). Starting in 2008 MAYBE moved into the realm of video game design creating characters and background art for video game producers RailSoft.

After nearly five years of journeymen work, the duo broke through with their first hit series Dusk Maiden of Amnesia by SquareEnix. The 10-volume horror series was an instant success and would inspire an animated TV series and radio dramas of the same name. Since then MAYBE has worked with major publishers - Kodansha and SquareEnix - focusing on Japan's revitalized fantasy genre to great success. Their other current title Tales of Wedding Rings is being published in the US by CrunchyRoll.