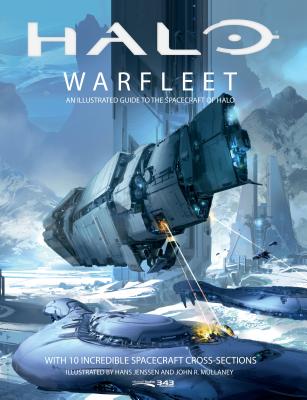 Halo: Warfleet is the official, authoritative guide to spacecraft in the Halo universe, featuring ten intricately detailed full-color cross-sections of the franchise's most renowned ships--including the Pillar of Autumn, Truth and Reconciliation, Infinity, and Shadow of Intent. Discover encyclopedic information which reveals the secrets of Covenant, UNSC, and Forerunner weapons, sensors, fighters, planets, and more!

About the Halo Franchise:
Exclusively published by Microsoft Studios and developed by 343 Industries, the Halo franchise is an award-winning collection of properties, more than $5 billion in worldwide sales to date, that has transcended video games and grown into a global entertainment phenomenon. Beginning with the original “Halo: Combat Evolved” (2001) to the record-breaking launch of “Halo 5: Guardians” (2015), the critically acclaimed and record-shattering series of games has reinvented how people think about video games and has since built a fan base of millions worldwide and inspired multiple New York Times best-selling novels, a live-action digital series, comic books, action figures, apparel and more.

The Halo franchise of games have sold more than 70 million copies worldwide, driving nearly more than 6 billion hours of gameplay by fans connected to Xbox Live.

About 343 Industries:
343 Industries is the developer of the blockbuster “Halo” series of video games and, as part of Microsoft Studios, oversees the “Halo” franchise, including games, original programming, novels, comics, licensed collectibles, apparel and more.

About the Illustrators:
Hans Jenssen was born in Copenhagen and currently resides in Devon, England, with his partner, son, and various other mammals, poultry, and fish. In the intervening time, he learned to draw and paint with an obsessive attention to detail which clearly shows in a body of work which includes everything from cutting edge green technology to a certain well-known far away galaxy and most recently the HALO universe. He is an enthusiastic eater, drinker, and glider pilot but rarely does all three at the same time.

Back in 1999, John R. Mullaney had just returned from a summer working in Teletubbyland's art department when the phone rang inviting him to contribute additional artworks to Lucasbooks' Star Wars Incredible Cutaways series. A longtime fan of Hans Jenssen and Richard Chasemore's work in these books, John couldn't have been happier to oblige and contributed several pieces to the series. Since then he has been lucky enough to indulge his love of science-fiction cinema by producing studio-licensed cutaway art for franchises such as Alien, Firefly/Serenity, and Batman. He lives in Reading with his wife and two sons, who sometimes tolerate his loud music and bad puns.