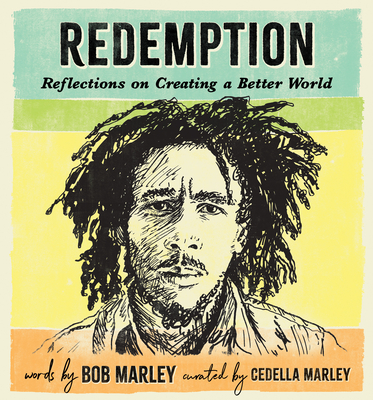 Filled with quotes from Bob Marley’s speeches, interviews, and writings, this illustrated collection is sure to resonate with fans of his music and political activism, at a time when we need exemplary heroes.

Redemption has many meanings, but there is one definition that embodies the spirit of Bob Marley’s beliefs and music: to reform, or to change for the better. Forty years after the release of his iconic “Redemption Song,” his desire to make the world a better place through mental and spiritual emancipation—important first steps to physical emancipation for the larger community—remains powerful and vital to this day.

Using Marley’s own words from interviews and his powerful song lyrics, his eldest daughter, Cedella Marley, creates a powerful narrative about the hard but rewarding path to redemption.

Bob Marley (1945–1981) remains one of the 20th century’s most important and influential entertainment icons. Marley’s music catalog has sold millions of albums worldwide. His iconic collection LEGEND holds the distinction of being the longest-charting album in the history of Billboard magazine’s Catalog Albums chart and remains the world’s best-selling reggae album. Marley’s accolades include inductions into the Rock and Roll Hall of Fame (1994) and ASCAP Songwriters Hall of Fame (2010), a GRAMMY Lifetime Achievement Award (2001), multiple entries in the GRAMMY Hall of Fame, and a star on the Hollywood Walk of Fame (2001). For more information, visit bobmarley.com and facebook.com/bobmarley.

The eldest child of Bob and Rita Marley, Cedella Marley is a descendant of reggae royalty. She is an award-winning recording artist, producer, author, and fashion designer. She is the C.E.O. of Tuff Gong International, the label founded by her parents, and the director of the Bob Marley Foundation. She is the author of the children’s books The Boy from Nine Miles, Three Little Birds, One Love, Everything Little Thing, and Get Up, Stand Up.