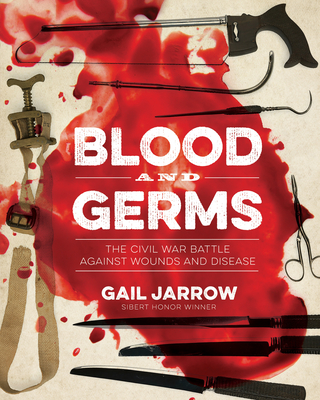 The science and grisly history of U.S. Civil War medicine, using actual medical cases and first-person accounts by soldiers, doctors, and nurses, is explored in this fascinating nonfiction book for young readers.

The Civil War took the lives of hundreds of thousands of Americans and left countless others with disabling wounds and chronic illnesses. Bullets and artillery shells shattered soldiers' bodies, while microbes and parasites killed twice as many men as did the battles. Yet from this tragic four-year conflict came innovations that enhanced medical care in the United States. With striking detail, this book by acclaimed writer Gail Jarrow reveals battlefield rescues, surgical techniques, medicines, and patient care, and celebrates the men and women of both the North and South who volunteered to save lives. The first title in the Medical Fiascoes series!

★ "For those interested in the history of medicine or fascinated by the Civil War, Jarrow’s latest offering astutely combines both topics. Making outstanding use of period photographs, in-depth research, and firsthand accounts, this effort chronicles the inadequate, sometimes almost farcically deficient medical care delivered during the war. Highlighting primary topics in a series of brief chapters, it follows soldiers through the typical responses to being wounded (or falling ill), from frontline interventions through field hospitals, then, via torturous ambulance journeys, to immense pavilion hospitals that both Union and Confederate sides were forced to establish. Outstanding backmatter, more typical of what might be found in fine adult nonfiction, rounds out this stellar presentation. A fascinating example of excellence in juvenile nonfiction." —Kirkus Reviews, starred review

★ "[A] history teacher’s dream! Jarrow shares primary source materials that offer a myriad of opportunities to bring history alive. The first in Jarrow’s Medical Fiasco trilogy, this book is quite timely. [T]hrough reading about the past we can learn important lessons for the present." —School Library Connection, starred review

"Although the concern with viruses is now ever-present, Jarrow shows in this well-documented informational book how germs and disease also shaped the Civil War. Archival photos on almost every page and sidebars about individual soldiers make the accounts personal and more harrowing. A time line and extensive online resources complete this masterful look at early medicine." —Booklist

"Through a balanced combination of strong narration and harrowing archival first-person accounts, Jarrow demonstrates how unsanitary living conditions coupled with a lack of microbial science knowledge allowed diseases such as dysentery...and malaria to kill both Union and Confederate soldiers at twice the rate of battle injuries [during the Civil War].  [T]his first book in the Medical Fiascoes series confirms Jarrow’s ability to craft meticulous, page-turning informational texts that thoughtfully examine the history of modern medicine." —The Horn Book

"Drawing from extensive archival sources, Jarrow (The Poison Eaters) debuts her Medical Fiascoes trilogy by skillfully narrating Civil War stories of soldiers who died not from bullets but from diseases such as typhus, typhoid, tuberculosis, gangrene, and malaria, and of the doctors and nurses who tried to save them. The book skillfully incorporates 19th-century newspaper typefaces and archival photographs, and employs eye-catching headings such as 'Mercury and Maggots' and 'Malignant Pus.' Jarrow also packs her pages with profiles of little-known heroes, such as Alexander Augusta, the first Black doctor to become a commissioned surgeon in the Union Army, and military doctor Mary Walker, the only woman to ever receive the Congressional Medal of Honor."— Publishers Weekly