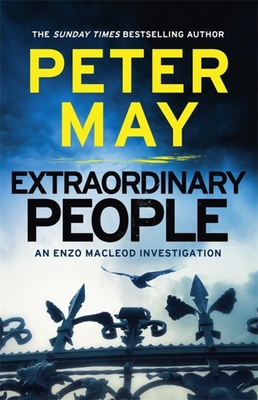 Half-Scottish, half-Italian Enzo MacLeod used to be one of the top forensics experts in Scotland, and now he lives in Toulouse, working as a university professor. Divorced in Scotland and widowed in France, he has an estranged Scottish daughter and a French daughter he has raised by himself.
As if his life isn't complicated enough, he soon finds himself unexpectedly on the hunt for solutions to some vexing cold cases thanks to an ill-advised wager about the power of forensic science.

Meanwhile, in Paris, a man desperately seeking sanctuary flees into a church. The next day, his sudden disappearance will make him famous throughout France.

Deep in the catacombs below the City of Light, MacLeod unearths disturbing clues deliberately left behind by a killer. But as the retired forensics expert draws closer to the truth, he discovers he may just wind up the next victim for his troubles.

Peter May was born and raised in Scotland. He was an award-winning journalist at the age of twenty-one and a published novelist at twenty-six. When his first book was adapted as a major drama series for the BBC, he quit journalism and during the high-octane fifteen years that followed, became one of Scotland's most successful television dramatists. He created three prime-time drama series, presided over two of the highest-rated serials in his homeland as script editor and producer, and worked on more than 1,000 episodes of ratings-topping drama before deciding to leave television to return to his first love, writing novels.

He has won several literature awards in France; received several English-language awards, including the Barry Award for The Blackhouse, the first volume in his internationally bestselling Lewis Trilogy; and in 2014 he won the ITV Specsavers Crime Thriller Book Club Best Read of the Year award for Entry Island. Peter now lives in southwest France with his wife, writer Janice Hally.